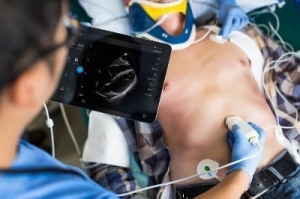 Available for $199 per month
Royal Philips announced last Friday at the American College of Emergency Physicians’ annual meeting that the S4-1 cardiac transducer for its Lumify app-based ultrasound received FDA 510(k) clearance. Ambulatory personnel and sports medicine physicians can now use the solution to perform cardiac exams at the point of care.

“Patients are being treated now in these low-cost environments outside the hospital,” Randy Hamlin, vice president and point-of-care business leader for Philips Ultrasound, told HCB News. “It doesn’t matter where you are; you can flow that information to the hospital.”

Lumify, which was introduced in 2015, is an app that’s available on Android smartphones and tablets. It can be used with two other Philips transducers that are designed for abdominal and vascular imaging.

Lumify leverages cloud-enabled technology to connect with the hospitals’ PACS, shared networks and system directories. The ultrasound data is also accessible on the Philips HealthSuite Digital Platform, which is an open, cloud-based IT infrastructure.

“We leverage the value of smart devices,” said Hamlin. “That gives us the ability to have cell capability, which isn’t offered by anyone else, so that the ambulatory personnel or sports medicine physician can send those images remotely from the soccer field to the hospital EMR.”

Another benefit of being an app is that it’s much cheaper than conventional ultrasounds. A handheld ultrasound can cost between $10,000 and $20,000, but Lumify is available through a subscription model for $199 per month.

It’s only available in the U.S. right now, but Philips plans to launch it globally next year. Low resource environments like Africa, where funding is often a challenge, will be interested in this technology, said Hamlin.

In Africa, WiFi isn’t readily available, but access to cell service is. The ultrasound images can be sent from a village to a regional hospital so the physician can determine if the pregnant woman needs to come in to the hospital for delivery.

“Having access to ultrasound opens up that possibility, and being able to send those images via cell is a great attribute for success there,” said Hamlin.