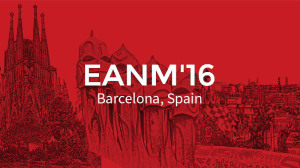 I just returned from three days in Barcelona attending the EANM. In the Unites States, our show is the SNMMI but it is the same general topic.

The show itself was packed with people. Most were from Europe but there were quite a few North Americans at the show.

I shook hands with Peter Webner from Zevacor and David Smith, the cyclotron and synthesis expert.

Rotem had a great booth and at 4:00pm they started handing out wine.

IBA had a flurry of activity around its new cube cyclotron and there were lots of people learning about it.

There were just as many people at the GE booth to be briefed on the PETtrace system.

I could not help but have the impression that there is more demand for cyclotrons outside the United States than within.

The show was replete with the latest software and just about every type of tracer you can think of; Von Gahlen, Tema and Comecer all had booths there and I had a chance to learn about the Tema injection system.

I did not have a chance to see the unit that Medrad/Bayer markets but I am told it is a great tool for saving time.

There were lots of smaller booths with tools designed to save time and effort in the production and use of radiopharmaceuticals, small instruments and large instruments.

Really, the molecular imaging business, in my opinion, is on fire outside the United States; at least, that is the impression I had.

The last people I had a chance to shake hands with were Bob Ranieri and Adel Holl at Biodex. I do not think it would be a real nuclear or molecular trade show if I did not see Adel.