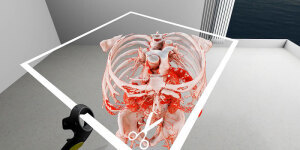 Courtesy of University of Basel
Researchers at the University of Basel in Switzerland developed a technology that uses CT data to generate 3-D images that can be viewed in a virtual environment to help surgeons as they plan surgical procedures.

Converting CT images into a 3-D image is not something new, but viewing that image with virtual reality technology is. In order to have smooth playback in the virtual environment, 180 images per second are required, but the older software was not able to generate that.

The researchers used sophisticated programming and the latest graphics cards to speed up the volume rendering to reach the required frame rate. The technology, called SpectoVive, can also perform fluid shadow rendering, which creates a realistic impression of depth.

The surgeons can use the latest generation of virtual reality glasses to interact in the virtual environment. For example, when looking at a hip bone that requires surgery, they can zoom in on the bone, view it from any angle, adjust the lighting angle and switch between the 3-D view and CT images.

“As a doctor, I am no longer restricted to looking at my patient’s images from a bird’s eye view,” Dr. Peter Maloca, ophthalmologist, said in a statement. “Instead, I become part of the image and can move around in digital worlds to prepare myself, as a surgeon, for an operation, in detail never seen before.”

The researchers are currently holding demonstrations for physicians to show how SpectoVive works. They are also hoping to get a better understanding of what the physicians need, in order to improve the technology.

A few museums have expressed interest in SpectoVive because it can be used to take visitors inside of exhibits like mummies. But the researchers affirm that the greatest potential for the technology lies in diagnostics, surgical planning and medical training.

SpectoVive was developed as part of the MIRACLE project that is underway at the University of Basel’s department of biomedical engineering. The project is receiving almost $15 million in funding from the Werner Siemens-Foundation.

The goal is for it to allow for the minimally-invasive treatment of bones using laser beams. The researchers envision that it will be used to plan surgical procedures and navigate robot-guided laser systems.