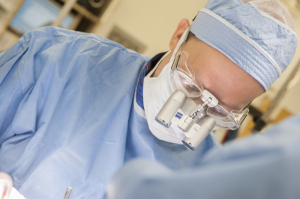 Dr. Andre Machado
performing DBS surgery
Cleveland Clinic announced today that it performed the nation’s first deep brain stimulation surgery on a stroke patient. This is part of an ongoing clinical trial that’s evaluating whether DBS can improve movement after a stroke.

In October 2016, the National Institutes of Health awarded Cleveland Clinic with a $5 million grant to develop the first clinical trial to assess DBS as a therapy for stroke recovery patients. Previous preclinical research done at the hospital found that DBS can help the brain form new neural connections during recovery.

A team led by Dr. Andre Machado, chairman of Cleveland Clinic’s neurological institute, performed the 6-hour procedure on December 19. Electrodes connected to a pacemaker device were implanted in the cerebellum and the small electric pulses were emitted.

The patient who underwent the DBS procedure has been sent home and is feeling well, and is in stable condition. They will continue to heal from the brain surgery over the next few weeks and then receive physical therapy.

After a few more weeks, the DBS device will be switched on as the patient continues physical therapy. The Cleveland Clinic team will regularly monitor them to determine if DBS can improve the effects of physical therapy.

The team will also use noninvasive imaging and electrophysiological techniques to study how stimulation affects brain activity. They are hoping to get a better understanding of its therapeutic mechanisms and how to best optimize delivery.

Machado patented the DBS method for stroke recovery and Boston Scientific owns a license to those patents, and its Vercise DBS system was used for the trial. Cleveland Clinic Innovations established a for-profit spinoff company called Enspire DBS Therapy in 2010 to fund the trial and commercialize the method.

The trial was co-funded by the NIH’s BRAIN Initiative Grant: Brain Research through Advancing Innovative Neurotechnologies. It’s among many other projects that are studying human brain activity, including computer programs that may help researchers detect and diagnose autism and Alzheimer’s disease and a cap that uses ultrasound waves to stimulate brain cells.

NIH has given out a total of 100 awards valued at over $70 million to 170 investigators at 60 institutions. Its goal is to develop new tools and technologies to better understand the neural circuit function, and capture a dynamic view of the brain in action.