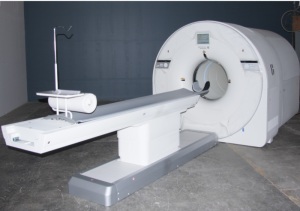 A team of researchers known as the EXPLORER consortium is inking deals bringing it closer to achieving a lofty goal: producing the world's first whole-body (or total-body) PET scanner.

After conducting what was described as "an extensive review," the UC Davis-based team selected UIH America — a North American subsidiary of Shanghai United Imaging Healthcare — to build the first scanner prototype, which is slated for completion in mid-2018.

To design the scanner's detectors, the consortium has enlisted Cork, Ireland-based SensL Technologies.

Unlike conventional PET detectors that use vacuum-based photomultiplier tubes, the whole-body scanner will incorporate solid-state silicon photomultiplier light sensors, a choice that Bryan Campbell, CEO of SensL, believes will provide better resolution for a system of this size.

The EXPLORER scanner will have more than 560,000 detector elements and will be capable of simultaneously capturing all organs. It will also offer a 40-fold increase in effective signal compared to conventional PET technology.

Since the new scanner will provide greater sensitivity, the researchers anticipate that the radiotracers will last longer and the doses can be reduced.

“Early clinical applications will likely be in improved cancer diagnosis and monitoring, but this scanner will also be used for a host of research aimed at developing new diagnostic applications in areas such as inflammatory disease, metabolic disorders, diseases associated with multiple organ systems such as the brain-gut axis, and infectious disease just to name a few,” Dr. Simon Cherry, professor of biomedical engineering at UC Davis and a member of the consortium, told HCB News.

At the World Molecular Imaging Congress conference in September, Cherry said that the EXPLORER scanner will be able to do all of this work in a fraction of the time. It usually takes about 10 minutes to conduct a total body PET scan, but this scanner can cut that down to 15 to 30 seconds.

The EXPLORER consortium — which was formed in 2011 and also includes research groups at the University of Pennsylvania and the Lawrence Berkeley National Laboratory — has had to overcome its fair share of obstacles to reach this point in its project.

The first big challenge they faced was persuading the academic community that despite the high cost of the technology and the unproven benefit, it was worthwhile to develop the system. A PET/CT scanner already costs about $2 million and the whole-body PET scanner will be significantly pricier than that.
1(current)
2