Mammography recall rate of 12-14 percent may be optimal: study 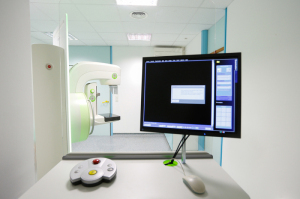 The long-standing issue of the optimal number of mammography recalls just got stirred up again with the publication of a new study published this month in the American Journal of Roentgenology.

A research team from several hospitals in the Chicago area have pegged the ideal recall rate at 12 to 14 percent, or the "sweet spot."

According to the study, this rate "suggests that the mean recall recommendation by the Breast Cancer Screening Consortium (BCSC) (10%) may be too low." The BCSC 10 percent rate was set in a 2007 published study, which also asserted that "at a recall rate of 12.3%, the estimated AW/ACD...suggests little benefit for any higher recall rate."

"I have been conducting medical outcome audits since beginning my breast imaging career in 1999...," Dr. Paula Grabler, lead author and medical director at Rush Oak Park Hospital told HCB News. "From conducting the audits it became clear to me that the national recommended guidelines for recall and cancer detection rates may not reflect optimal performance in detecting early stage breast cancers."

The study reviewed 984 screen-detected cancers from a total of 188,959 digital screening mammograms generated by 19 breast radiologists. A total of 75 annual calculated recall rates by radiologists were analyzed at less than 10, 10 to 12, 12 to 14 and higher than 14 percent rate. The researchers were then able to arrive at a statistically significant difference at the 12-14 percent recall rate, which associated with finding the most breast cancer.

"The findings were not a surprise. They confirmed my informal observations," said Grabler. "I think the jury is still out on the reaction to this study. Some of my colleagues in Chicago have expressed gratitude that this study supports recall rates higher than those currently recommended."

According to the study, in the past, critics have speculated that the higher cancer detection rates generated by the higher recall rates may be due to the detection of "insignificant" cancers which do no progress to invasive types of cancer. However, the study found no difference between these less serious cancers for each recall subgroup.

Grabler acknowledged the study has limitations.

"What I consider most important is that breast imagers use their medical outcome audit to evaluate their work and assess if there is a need for change and what those changes may be. Simply increasing recall rates will not necessarily result in increased cancer detections rates," she said.

Graber also noted that the role of 3D mammography/tomosynthesis in decreasing recall rates without decreasing cancer detection rates is important. This was not an area addressed in the study, but she said is currently being explored in the literature.