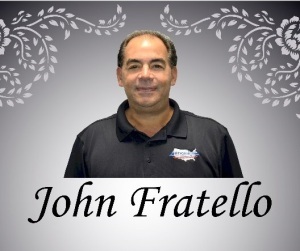 John Fratello, whom many of you may remember as the friendly and outgoing salesperson at Nationwide Imaging, died on 1/⁠29/⁠2017. He was 54 years old. John leaves behind his wife, Maria, and his two children, Christina and Johnny

John had a great personality and livened up any room the moment he walked in. He always had a big smile, a firm handshake and he went out of his way to make you feel good.

In 2000, John joined Nationwide Imaging Services as a salesperson and proved to be a hard worker. If I called early in the morning or late at night, there was a good chance that John would answer the phone.

He was invited to join Nationwide by Robert Manetta and it was Robert who shared Johns passing with me. Robert told me that he will miss John as will all of John's coworkers.

I trusted John in business and I felt that he was a honest person who cared about his customers.

Over the years I have cataloged many funny stories about John but most of all I will always remember a telephone conversation I had one night at 7:00 pm.

John was in a dry spell at work and was worried about his future. He explained to me how important it was for him to be a success in business because he loved his family and wanted to provide a better life for them. He credited me with encouraging him to hang in there and keep pushing but really he deserves all the credit because he made up his mind that he would push harder and he did just that!

In time John became one of the best deal makes that I know. It is a hard business but John made it happen.

I always had a high opinion of John and I will remember him as a hard worker, a good guy and a friend. I am so glad to say that I told him so when he was alive.