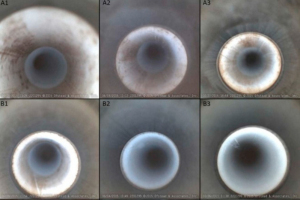 Fine detail sequence of scope surface
changes due to debris and damage.
A just-published study finds that current endoscopic manufacturer cleaning instructions for a wide range of GI, urological and respiratory devices used in diagnostic procedures still fail to protect patients from the risk of infection.

The ongoing problem that has plagued scope manufacturers and users starts up front, with solid contaminants that remain in scopes that sterilization does not completely remove.

"These findings suggest that the current guidelines and cleaning instructions from the endoscope manufacturers aren’t adequate to ensure that the endoscopes are clean enough for disinfection or sterilization efforts to succeed," Cori Ofstead, MSPH, President and CEO of Ofstead & Associates and lead study author told HCB News.

The study — which was published in the most recent issue of American Journal of Infection Control — expanded on an earlier finding that endoscopes were still contaminated after high levels of disinfection. According to Ofstead, this study was conducted to determine if the contamination was related to scope age. In the study, 20 scopes were followed over a seven-month period.

"We were surprised to see how much could be learned by looking inside the endoscopes with a tiny camera that’s called a borescope," she explained. "When we examined the insides of ports and channels, we found damage or debris inside every endoscope, and there was residual fluid in most of them — even though they’d been dried."

One of their findings is that when the study group performed tests that can detect ATP — a sign of residual contamination — they found that manual cleaning was effective almost all the time for colonoscopes. But only about half the cleanings for gastroscopes were effective, even though the exact same methods to clean both types of scopes were performed.

"The visual inspections we performed found that every endoscope had some form of damage, typically including scratches, staining, and dents," said Ofstead. "There was also a build-up of debris in a lot of the endoscopes, indicating that all the soil hadn’t been removed, in spite of the technicians doing everything properly when reprocessing the endoscopes."

The results of the study suggest a change in protocol. According to Ofstead, their findings suggest that technicians should examine every endoscope with lighted magnification before use on another patient. The findings also support new recommendations made by AORN and AAMI/ANSI regarding the routine use of biochemical tests to verify that cleaning is effective. These ATP and protein tests quickly give results and are fairly inexpensive. This processing can detect solid soil cleaning failures so the scope can be re-cleaned before disinfection or sterilization.

"Without these cleaning verification tests, the technicians have no way of knowing if their efforts to clean the scope worked, as they can’t see inside it," cautioned Ofstead.

She said her team recently completed a "small pilot project" to access the cost of reprocessing endoscopes when technicians follow the new guidelines. They found that it takes 76 minutes of hands-on staff time to clean and disinfect each scope. Associated costs for this process range from $114 to $281.

Fixing this problem is going to take a commitment from hospitals and clinics to increase sterilization operating and capital budgets.

"Technicians in many institutions are being asked to do more with less, and that pressure is not compatible with the need to do a more rigorous job to ensure patient safety," said Ofstead. "Our study was done in a best-case-scenario setting, with trained technicians using top-notch reprocessing equipment and materials. In many institutions, this is not the case."