My own experience with health care billing 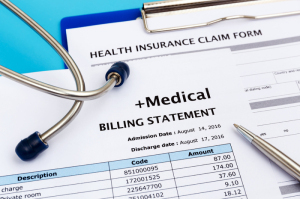 In December 2015 I was in Pennsylvania visiting my mother-in-law. I didn't feel well and I went to the emergency room.

I won't tell you what my symptoms were because there are at least 100 of you who would crack a joke, but anyway I went.

Next, I spoke to the billing representative.

I presented my insurance card, issued by United Healthcare — one of the biggest insurance companies in the country. No one knew what my co-pay should be but using my telephone I was able to research this for the representative and prove to her that I had a $100 co-pay which I promptly paid.

About 30 minutes later I had an exam with a physician that lasted roughly four minutes. He was abrupt and unfriendly and impatient. He told me there was nothing wrong with me and sent me on my way.

Next thing I knew I received a bill for $750 from the physician group and then another $180 bill from the hospital.

They just sent me another invoice.

I wanted to explain that they should submit the bill to my insurance company.

Our health administrator finally track someone down who told us that if we paid $180 they would not send me to collections.

It turns out that the physician group has already been paid by the insurance company and was just trying to hit us up for more money.

The insurance company agreed to reimburse me for my overcharge and when I asked them if they were going to go after this unscrupulous physician group they said it would cost them too much to go after them. They said it was the big overage charges that they worried about.

The hospital took my card and when I show them that I had paid they gave me a refund so Berwick Hospital, in my opinion, is honest.

I can't help have a feeling that this physician group and possibly others are cheating the insurance companies out of small money every day.

One thing is for sure: I would hate to be the person in charge of fixing health care. It seems like there's a number of ways to game the system.

In the end, you and I don't want to pay for it.