ECRI makes case at HIMSS for IT patient safety leadership 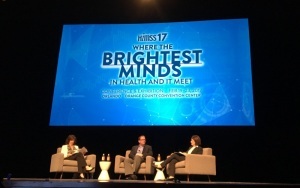 #HIMSS17
Last week, two executives from ECRI and a health system Chief Nursing Informatics Officer made the case to HIMSS attendees that hospital informatics staff must move from the help desk to the medical floor to keep patients safer.

“IT has to become visible to leadership and staff in designing workflow and information aggregation systems to improve patient safety. That’s the word we’re trying to get out at HIMSS this year,” Ronni Solomon, JD, executive vice president and general counsel told HCB News.

She led a panel discussion with Bill Marella, executive director of ECRI and Patricia Sengstack, RN-BC, chief nursing informatics officer at Bon Secours Health, titled “Journey to Patient Health: Where We’ve Been and How Health IT Can Help.”

Marella announced that ECRI has released eight new safety practices as part of a Health IT Safe Practices initiative. These standards are part of the ongoing work of the Partnership for Health IT Patient Safety that formed in 2013. The recommendations cover a wide range of improvements. These range from standardizing patient identifiers, patient attributes, and distinguishing information across screens, as well as implementing monitoring systems to detect identification errors.

To drive the need home for such safety changes, Solomon asked for a show of hands of how many in the audience had an IT safety program in their hospital. Only a few in attendance responded.

“IT has the ability to hardwire safety into hospital systems to hold the gains we’ve made in safety (and make further improvements),” said Marella. “IT must synthesize the data and put it front of people who can take action.”

As an example, he cited one hospital leadership team they worked with last year that used the transparency of such data to share hundreds of cases of patient care errors that had been retained in risk management and not shared.

“In God we trust, all others bring data,” said Sengstack. “A famous quote on mistakes instructs that we have to learn from all mistakes because we won’t live long enough to make them all ourselves.”

Solomon noted there has been progress in reducing patient errors. She cited 125,000 deaths averted and $28 billion saved from 2010 through 2015 through various initiatives. This includes a 21 percent reduction in hospital-acquired conditions.

But, the three stressed, there is still much to do by every department in a hospital.

“Safety is a full time job for everyone, not just the safety officer,” Marella said, making his case for IT to get involved. “The hardest part is shifting culture. The responsibility has to be distributed and everyone needs to be mindful, including the informatics staff.”