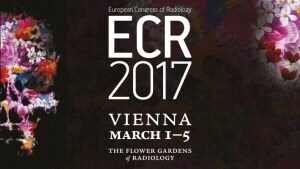 I attended the ECR this year and it is the busiest ECR I have ever been to and one of the busiest trade shows I have been to in years.

Almost everywhere you went there was a crowd and lots of people.

Most of the end users were from Europe but there were plenty from North America, South America, Africa and the Middle East. Even a few from Asia.

Michael Friebe writes a report every year about ECR and RSNA and this year I am going to yield to Michael and his very insightful report...

which you can read by clicking here.