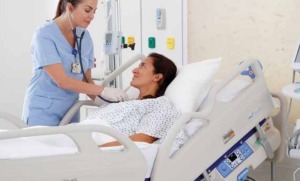 Bedsores are the No. 3 disorder after cancer and cardiovascular diseases in terms of cost, according to a 2015 study published in the International Journal of Research in Medical Sciences. Grade 1 and 2 bedsores can cost between $125 and $451, and grades 3 and 4 between $1,400 and $2,300.

The Centers for Medicare & Medicaid Services penalizes hospitals for these hospital-acquired infections. The cost issue, combined with the fact that bedsores affect over 1.3 million adults globally per year, has encouraged hospitals to look for a solution.

“Hospitals are extremely aware of what they will and won’t be reimbursed for, so if they can invest a few more dollars in a [hospital] bed that will save them an average of $40,000 per hospital-acquired pressure ulcer, that’s a good return on investment,” says Julie Andrews, clinical analyst at MD Buyline.

Smart hospital beds are capable of automatically turning patients every few hours. North York General Hospital in Toronto has been using these beds since the early 2000s in its intensive care unit to prevent bedsores. “[The beds] rotate patients so [nurses] don’t have to roll and turn them as frequently,” says Dr. Donna McRitchie, vice president of medical and academic affairs at the hospital. “It also does it in a somewhat gentler way with a continuous slow rotation. That helps take pressure off skin and other bodily areas that can be impacted by pressure.”

The patients that present to the ICU are very different than those of 20 years ago. Many of them are elderly or obese with multiple chronic diseases such as diabetes and infections, and the smart beds are especially useful for them. The beds can move in all directions, be tilted at different angles and extended for very tall patients. They can also weigh patients and perform vibration and percussion massages. Historically, a team of nurses would have to manually turn patients every two hours. With these new beds, the staff isn’t at risk for wrist or back injuries. “Once it became very apparent that this was a quality of care issue and not just a nice thing to have, we really needed to step up and redefine our priorities and the smart beds became a must have,” says McRitchie.

The smarter, the better
Smart beds are also capable of sensing the patient’s position, alerting the clinicians regarding any issues and transmitting the data to the hospital’s electronic medical record (EMR). Stryker Corporation offers a technology called iBed Awareness on its InTouch Critical Care and S3 Med-Surg beds. It monitors local bed status and alerts clinicians if preset parameters are compromised. The company’s iBed Connectivity technology connects the beds to third-party systems like EMRs. A major hurdle for hospitals is cost. A standard hospital bed costs about $6,000, but the smart beds can range from $10,000 to $40,000, according to MD Buyline.
1(current)
2
3