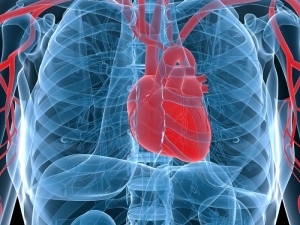 A new CT technique to determine heart attack risk from coronary disease reduces complications, is performed quicker and is less expensive, according to a study published online in the journal Radiology.

The current two-test protocol — invasive angiography with stress test followed by a single photon emission tomography (SPECT) study — is currently the gold standard, but the procedure requires threading catheter from the groin to the heart. In some rare cases, this can result in complications, ranging from vascular problems to stroke or heart attack.

Heart disease is a leading cause of death worldwide. Bypass surgery or stent placement is the standard invasive treatment, but recent studies indicate that many patients can be managed medically — a decision informed by imaging exams.

Chen said this new ability to evaluate different aspects of heart disease; blood flow blockage and visualizing plaque (or stenosis) in an outpatient setting is a significant finding.

"This recently published work builds on (prior) knowledge where we have shown that after two years of follow-up, the new CT-based imaging test has the same ability to predict future major adverse cardiac events, which include heart attack, revascularization, arrhythmia or hospitalization for chest pain or congestive heart failure," Chen said.

He added that the findings suggest that the combination of the two noninvasive tests, CT myocardial perfusion and coronary CT angiography, can help determine risk as effectively as traditional testing, such as nuclear SPECT and invasive angiography.

Chen and his team compared the invasive and noninvasive approaches in 379 patients who were referred from November 2009 to July 2011. They considered the ability of both techniques to predict whether or not a future major adverse cardiac event (MACE), such as a heart attack, revascularization, arrhythmia or hospitalization for chest pain or congestive heart failure would occur.

There are obstacles before the noninvasive approach can achieve more widespread use, including the lack of a reimbursement code for stress CT perfusion. Still, the study found that the technique is relatively easy to incorporate into existing practices.

Fifteen of the 16 centers in the trial had never done the procedure before, according to Dr. Chen, but all were all able to learn it effectively.