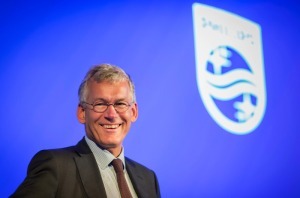 Frans van Houten
Philips got off to a big start in 2017, with a seven-fold jump in Q1 profits – due in part to its lighting business spinoff last year.

In the process, the company is morphing into “the pure health tech company that we aim to be,” CEO Frans van Houten told HCB News in an exclusive interview.

To that end, Philips is now included in the STOXX 600 Index in Europe as a health care company, and is preparing to get listed for health care on the MSCI Index. Van Houten called that change in listing “the last hurdle” needed to complete the company's repositioning. The transition has gone well, he suggested, because it was done over a six-year period that allowed the company to shed consumer electronics while beefing up its health care portfolio with acquisitions.

“We took out an entire management layer and then gradually all the pieces started falling in place,” he said. “It’s great to see the focus on health technology and the customer base is paying off.”

Health technology showed solid growth with highlights including “our diagnosis and treatment business, with 5 percent order-intake growth,” he said, stressing that, “most notably, China, Europe and India did particularly well on order-intake growth.” This has led the company to reinforce its guidance of 4 to 6 percent growth, and around 100 points of profit improvement.

The good numbers “exceeded market expectations, and hence the share prices went up considerably,” observed van Houten, adding that, “myself, I’m never satisfied, but this is a good start of the year.”

“As the first quarter progressed, we saw increasing anxiety with some health systems especially those that are more exposed to Medicare and Medicaid, and it's our belief that it slowed down revenue and acceptance of projects on the way, maybe moving a few into the second quarter,” he suggested, adding that it also contributed to orders in North America being “somewhat soft.”

“I was in New York the other day talking to the CEO of an IDN who said, 'whatever happens, value-based care and accountable care is a trend that will continue, but for a while there might be some confusion',” he shared.

Growth investments
Reflecting the company's commitment to innovation, it's investing “around 10 percent of revenue into R&D,” he stated.
1(current)
2