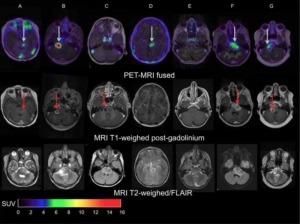 Through their work, they were able to determine the likelihood of the anti-cancer drug bevacizumab (Avastin) reaching the tumor.

"Meeting families whose child suffers from DIPG is one of the hardest and most challenging things in our daily routine, because despite decades of research the survival of patients with DIPG still does not exceed 10 percent at two years after diagnosis," Sophie E.M. Veldhuijzen van Zanten, M.D. and Ph.D. candidate in pediatric oncology at the VU University Medical Center in Amsterdam told HCB News. "Most children die within nine months from experiencing the first symptoms."

This led to a hypothesis that there is a drug delivery problem across the blood-brain-barrier in DIPG. In short, the team suspected that drugs might not reach the tumor properly. This hypothesis, however, had never before been substantiated by medical experiments in humans.

The study findings, which were just published in the Journal of Nuclear Medicine, show the inability for drugs to reach the tumor appropriately in children with DIPG. They demonstrated this by measuring the tumor uptake of zirconium-89 (Zr-89)-labeled bevacizumab with PET.

Their findings suggest that drug delivery between children with DIPG varies. Ideally, only those patients who show drug uptake in their tumor should be treated. In addition, they evaluated the safety of the procedure and determined the optimal timing for imaging.

These findings may help the DIPG research field that, so far, has not yielded much good news. The high mortality rate for children with DIPG contrasts, for example, with children diagnosed with another common childhood cancer, leukemia. Since the 1950's, survival rates for leukemia have increased to about 85 percent, according to Marc H.A. Jansen, M.D., Ph.D., one of the other research team members.

“Our results support the development of new routes to reach the tumor in DIPG, such as administering drugs directly to the tumor by convection-enhanced delivery,” he said. "In addition, by showing that the procedures are feasible in children, we paved the way to extend the field of molecular drug imaging in children. This technique may be helpful to explore the potential of any therapeutic agent in any type of childhood solid cancer," he said.

According to Veldhuijzen van Zanten and Jansen, children with cancer are particularly likely to benefit from molecular drug imaging. Since drugs without proven therapeutic effect may cause lifelong side effects, the research also helps to potentially reduce harm to children.

Only seven children participated in the pilot study. The research team is now expanding the study to other brain tumors in children, and is planning to study other antibodies and inhibitors as well.

"Our study is the first molecular drug imaging study ever performed in children, and the first to show that indeed there is considerable heterogeneity in drug uptake of bevacizumab (Avastin) among DIPG patients, and even within DIPG tumors," concluded Veldhuijzen van Zanten.

Other members of the research team from the pediatric oncology/hematology and radiology and nuclear medicine departments at VUUMC included: Veldhuijzen van Zanten, M.D.; Guus A. van Dongen, M.D. and Gert-Jan L. Kaspers, M.D.