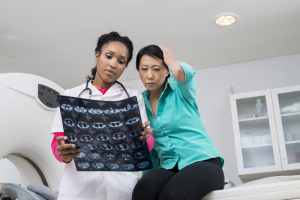 In a new study of 376 patients who complained of chest pains, it was found that routine imaging scans uncovered incidental findings in more than half of the patients — only 7 percent of which were medically significant.

The researchers, who have published their findings in the May issue of the Journal of Hospital Medicine, are urging radiologists and hospitals to find ways to safely reduce the added cost and potential risk of keeping these patients in the hospital longer than necessary.

“We were not surprised that incidental findings were so common on radiologic imaging, as there is established literature on this point,” Dr. Venkat Gundareddy told HCB News. He is director of the Collaborative Inpatient Medicine Service at Johnson Hopkins Bayview Medical Center in Baltimore.

“Our surprise came when we saw that there was a clear association with these incidental findings and increase in length of hospitalization,” he said. “Though our study does not prove causality, this does speak to concerns of increased health care resource utilization.”

In addition to hiking-up medical bills, longer stays in the hospital may also be unnecessarily exposing these patients to hospital-acquired conditions, added Gundareddy. In fact, the study showed these medically insignificant findings kept patients in the hospital an average of 26 percent longer than people without incidentals.

“For patients who go to the hospital with chest pain, they should take away from this study that certain radiologic imaging studies, like CT scans, can yield a lot of incidental findings unrelated to their chest pain," Gundareddy said. "While most of these are of little clinical significance, some might warrant further work up."

Counseling patients about the possibility of discovering incidental findings based on the imaging modality used is very important to alleviate patient concerns. Being judicious in using these imaging modalities and "choosing wisely" could limit unnecessary costs for health care, he added.

“In the future, as we get more and more sensitive testing, it will become all the more important that we have robust guidelines on reporting and work-up of these incidental findings,” he said.