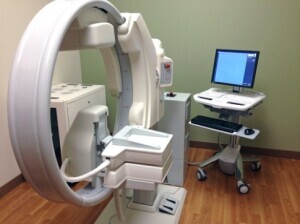 The system, manufactured by Gamma Medica, uses the radiotracer technetium-99m sestamibi, with a dual-head digital detector and a special collimator, to provide adjunctive screening to mammography for women with dense breasts and who have a higher risk of breast cancer.

It is the first such in Michigan, and has been installed at Henry Ford West Bloomfield Hospital, and radiologists have gone through training at the Mayo Clinic.

Dr. Patricia Miller, director of Henry Ford’s Breast Imaging Center, says a few patients have been screened at no charge.

“We’re now beefing up again to put it online for any patient who wants it,” Miller told HCB News.

Miller said challenges have come in making sure patients are comfortable as they remain still during the eight to 10 minutes it takes to image each breast, as opposed to mammography, which takes seconds. However, unlike mammography, patients’ breasts are not compressed during MBI.

“Patients tolerate it very well because the breast is not in compression, it’s just sitting between two image receptors,” Miller said.

Clinicians need to make sure the room is at a comfortable temperature and may place a blanket on the patients’ shoulders.

Another challenge comes with insurance coverage for MBI. Under Michigan’s breast density law, insurance companies are not required to pay for adjunctive screenings.

“We’re having to work with insurance companies to pay for MBI,” Miller said, noting that screening with MBI is around $500, as opposed to thousands of dollars for breast MRI.

Miller said that working through the negotiations with insurance companies, who consider MBI “experimental,” is worth it for the results.

For the study, nearly 1,700 women with dense breast underwent supplementary screening with the LumaGEM MBI system, after having a mammogram, resulting in the detection of 13 malignancies that had not been detected with mammography. About 85 percent of the cancers found were node negative, meaning they had a better prognosis.

“Despite providing the best mammogram we can, we know that sensitivity is not 100 percent,” Miller said. “For women with dense breast tissue, it’s a much more sensitive exam. Adding this as an adjunct, it provides great peace of mind.”

The Henry Ford Health System will also be participating in further study of MBI with the Mayo Clinic.

“The new installation of the LumaGEM MBI system at the Henry Ford Cancer Institute gives women in Michigan and surrounding areas access to a clinically superior diagnostic and secondary breast screening method,” said Philip Croxford, Gamma Medica president and CEO, in a statement. “We are delighted to be able to partner with the Henry Ford Cancer Institute and look forward to collaborating with them to help improve early cancer detection for women who are at greater risk. We believe MBI will ensure that more women have the opportunity to receive personalized breast screenings and improved clinical outcomes.”