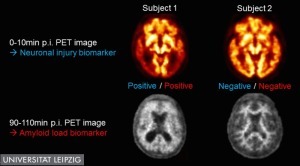 The Alzheimer’s Association reports that more than five million Americans are estimated to be living with Alzheimer’s disease. This number is expected to swell as high as 16 million by 2050, when Alzheimer’s and other dementias could cost the U.S. more than $1 trillion.

“We were motivated to conduct this research by the facts that Alzheimer’s disease is a growing health care concern, that it is known that imaging-based and other biomarkers can support Alzheimer’s diagnosis, and that so far the imaging-based acquisition of both Alzheimer’s biomarker categories (amyloid pathology and neuronal injury) requires two separate imaging sessions,” Dr. Henryk Barthel, assistant medical director at the Department of Nuclear medicine at the University of Leipzig, told HCB News.

The study examined 112 subjects, between the ages 62 and 82, about evenly split between genders. Among the group, 41 were diagnosed with mild cognitive impairment, 50 with probable or possible Alzheimer’s and 21 with another dementia.

Dual time-point 18F-FBB PET scans were conducted during the first ten minutes of the procedure and again from the 90- to 110-minute mark. Researchers performed quantitative and visual analyses of PET data. With this data, they were able to determine both neuronal injury and amyloid load in all subjects.

According to Barthel, larger prospective trials are needed to further validate this research. But if these results continue, dual time-point 18F-FBB PET could supplement diagnostic dementia workups by providing essential information about Alzheimer’s pathology in a convenient and clinically useful manner.

“With our research we show that it might be possible in the future to obtain this dual Alzheimer’s biomarker information out of the application of one single PET tracer by imaging the patient’s brain in dual time-windows within one session,” Barthel said. “This approach will increase patient convenience and might increase patient and caregivers acceptance of the diagnosis.”