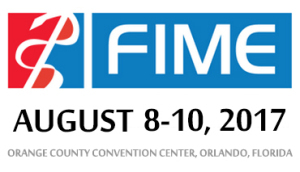 It seems to me that the show is larger this year. I spoke with the operators and they told me that there were 1,650 companies exhibiting from 40 different countries and that exhibitor total is 15 percent higher than last year's figure.

I believe that Informa, a company that sponsors a number of shows around the world, reached out to its exhibitor base around the world and invited other companies that were previously not familiar with FIME, to attend. As a result, there was a big mix of companies with a broad range of products, from all over the world.

The total attendance has not been listed yet, but my gut feeling is that there are more people in attendance this year than there were last year.

This model of holding a general show is somewhat unique here in the U.S. When you think about it, most of our shows specialize in Radiology or Ultrasound, or Laboratory or Clinical chemistry or whatever, but there are many large shows around the world that are more general and Informa does a great job tackling that.

It will be interesting to see what the final attendance numbers are for the show. FIME is already confirmed for Orlando in 2018 because construction won't be finished yet in Miami, but it is my prediction that if Informa goes back to Miami, it will not be to South Beach because I suspect the South Beach Convention Center is just not big enough for this event anymore.