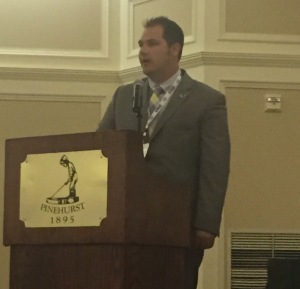 This was the 39th annual symposium of the North Carolina Biomedical Association and although I was only able to attend the business meeting, I was very impressed with what I heard.

The current president is Codi Nelson who had previously served on the board and on various committees and he recognized a number of past presidents and former board members who were there. Two $2,000 scholarships were given out, one by GMI and the other by Drager and both were given to young up-and-coming biomedical engineers.

There was a group there from Presbyterian Hospital and board member, Clint McCoy, introduced them as the "Shop of they Year." This diverse group was selected because of the way they support each other, work together and help each other out without being asked. Sometimes one engineer would be on duty when a problem would come up that another engineer would be more familiar with, for example, there was never any hesitation just because the the engineer with the experience was not on duty – they still helped each other.

Time was also spent discussing educational programs, the budget and the the nomination and election of new board members.

When I left I had the impression that the educational programs help biomedical engineers do a better job of taking care of the equipment. I was impressed.

You would have the feeling that it’s not just about education, it’s about saving lives.

I’m looking forward to the 40th meeting of the North Carolina Biomedical Association.