Patient face-time is radiology's big goal, but it doesn't pay as well 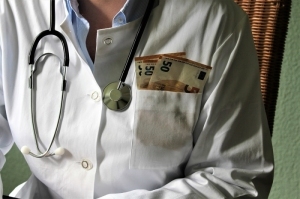 In findings the lead author termed "surprising," a study has found that Medicare payments to radiologists have dropped with the rollout of reduced professional (physician) component payments, in part, due to the 2005 Deficit Reduction Act (DRA).

The research — just published in the Journal of the American College of Radiology — also determined that noninvasive diagnostic imaging (NDI) Medicare payments to all specialists, as well as radiologists, peaked in 2006.

"Our research team has been studying utilization and payment trends in imaging for years," Dr. David Levin, lead author and emeritus professor of radiology at Thomas Jefferson University, told HCB News. "We were surprised to find that cuts were as deep as they proved to be."

According to Levin, radiologists have been somewhat insulated from recent cost-cutting measures. Earlier NDI cuts were aimed at the technical component of service or the hospital side of imaging. As about 80 percent of imaging is performed in hospitals, he said, health systems had borne the brunt of such reductions in reimbursement.

Such was not the case with other specialists. Cardiologists, for example, perform most of their imaging in their offices and outpatient care payments have been hit harder.

"Any time reimbursements drop, it puts pressure on a practice. Radiologists need to focus on making their practices run as efficiently as possible so they can increase their volume to make up for per-unit reimbursement cuts," said Levin.

But this comes at a cost, he added. Radiologists are under pressure to spend more time talking to patients to improve patient satisfaction scores. They are also expected to be more available to consult with referring doctors, which increases referrals.

Since other surveys indicate radiology incomes have increased despite the Medicare payment cuts, they may have "competing priorities."

"So that suggests that they are focusing more on increasing volumes, rather than on interacting with patients and referring doctors," said Levin. "That may be good for their pocketbooks, but probably isn't good for the specialty in the long run."

Levin explained that "just about every leader" of The American College of Radiology has urged radiologists to take more time to engage in noninterpretive studies. This, he said, is part of a strategy to prevent radiology from becoming viewed as a commodity and theoretically less valued by hospitals and payers.

But is this trade-off actually taking place on the front lines? "This does not appear to be happening," Levin said.