My mother-in-law celebrates her 100th birthday 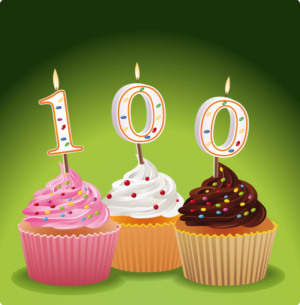 You may or may not know my wife, Barbara. She is one of the nicest women in the universe, as well as one of the most stylish. If you have met her, you know that her mother is still alive.

Barbara's mother Helen lives in Pennsylvania, about three and a half hours away from New York City, but we still get to visit her. Over the last 20 years, we have visited her between 40-45 times a year.

She still lives at home, alone. She still does crossword puzzles in ink. And whenever we show up, there is always something in the oven for us.

The other day when the terrorist killed people in lower Manhattan, which is just a few blocks from our office, I called my mother in law to let her know that we were alive and well. She said, "Why, what happened?" So I asked, "Aren't you watching television?" And she said, "No, I am doing the laundry and vacuuming."

Today, I called her and when she answered her cell phone, she was in the grocery store buying groceries!

Over the years, she has told me a million stories about her first telephone call, car ride, television, airplane ride, and a host of other interesting stories that span decades.

She really is a wonderful lady, and great to spend time with. So join me in wishing her a happy birthday!