Expert makes the case for patient access to radiology reports 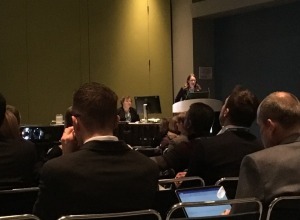 Dana Habers speaking at RSNA session
At the RSNA meeting last week, there was much discussion about what role radiologists should be expected to play in the health care system.

“On my second day working in the department of radiology, our chair said to me that radiologists are the doctor’s doctor,” Dana Habers, chief administrative officer of radiology at the University of Michigan Health System, told meeting attendees last Monday. “But one of the things I keep saying [now] as I walk through the halls is that they are also the patient’s doctor.”

In studying the patient’s perspective and preferences, Habers found that patients want a more active role in their care process.

In recent years, some experts have considered the possible benefits of giving patients access to radiology reports, but one of the main concerns is that it might result in radiologists getting inundated with phone calls after a patient receives bad news in the report.

She told the story of an 8-week pregnant patient in her late thirties who visited the emergency department due to spotting. She received an ultrasound exam and the radiology report was published directly to the patient portal.

“In this situation the patient was very happy because she received the results on her smartphone in the ED,” said Habers. “She knew the outcome of the ultrasound and was ready to go home.”

Patients are more educated about the medical field than they were in the past because of the Internet and having to select health plans.

They have also become accustomed to having what they want at their fingertips.

“I think timing is really important,” said Habers. “The culture has changed and the tools have changed and we’re at a time where we are capable of doing this. I realize that it’s very difficult, but challenging is what we do.”