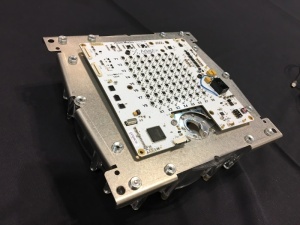 #RSNA17
CHICAGO – A U.K. company has developed a new way of generating X-rays, which it hopes to turn into a truly portable 3-D system used for orthopedics and general radiography, without the need for a conventional X-ray tube.

Adaptix Imaging didn’t have a booth at the 2017 annual meeting, but did have a presence, showing off a functional prototype with an array of X-ray sources, which would be used to manufacture a portable digital tomosynthesis system.

“The beauty of a system like this is that with a conventional tomosynthesis system, you take your single source of X-ray, a conventional X-ray tube, and you move it around mechanically,” Conrad Dirckx, product manager at Adaptix Imaging, told HCB News. “As soon as you need to move things around mechanically you make the system heavy, you make it complex and it takes time to do the full acquisition. If you can have a solid-state device where you no longer need to move it, but you’re simply electronically switching on each emitter, then suddenly you’ve made your device much simpler. The emitters are also very low-powered, so we can get nice and close to the patient and we don’t have a problem with magnification issues because that comes out in the tomosynthesis reconstruction process.”

The company has a mockup of a four-panel general radiology source, but is looking to partner with an OEM to manufacture a device, and is planning to have a product on the market for general radiology within a couple of years. The system would likely be much lighter than a standard radiography system — 30 to 40 kilograms, versus the standard 400 kilograms for a portable 2-D system, Dirckx said.

The cold cathode technology used doesn’t need active cooling, leading to lower power consumption. The dose is also similar to that of a conventional 2-D X-ray and also closer in price to a 2-D system than a 3-D system, Dirckx said.

“That just opens up the possibility of making it really, truly mobile and portable,” Dirckx said. “It is bringing mobile tomosynthesis into much wider use.”

Dirckx gave the example of placing a nasogastric tube in the ER as a situation where the 3-D system would be a benefit.

While the company still needs to consider the proper regulatory pathway for the device it is envisioning, that is something it would work out with an OEM partner, Dirckx said.