Donald Trump had a CT scan, here's what we learned 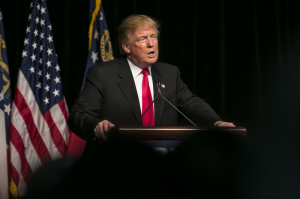 President Trump has been declared
"mentally, very sharp" and "fit for duty"
despite having heart disease
U.S. President Donald Trump underwent a CT scan as part of a recent medical evaluation.

Although the results showed signs of heart disease, Dr. Ronny Jackson, the physician to the president, declared his patient to be “mentally, very sharp” and “fit for duty."

The White House doctor relayed the news earlier this week while disclosing Trump’s basic lab measurements and physical exam results, saying that a coronary calcium CT scan came back with a score of 133, confirming a diagnosis for a common form of cardiovascular disease.

"His score is 133 and he is 71 years of age, which puts him in the 46th percentile," cardiologist Dr. Rachel Bond of Lenox Hill Hospital in New York, told CNN. "What does this indicate? Yes, he certainly has coronary artery disease because calcium is present. But this is also common for someone his gender, race and age. When I compare him to other males who are 71 and white, only 46% of others have a better score than him."

Coronary calcium scores of more than 100 indicate the presence of plaque, a sign that heart disease is present and that patients are at risk of a heart attack. A score below 100 reduces the risk to moderate.

Trump, according to his score, is in the mid-risk range for his age group and is at moderate risk of suffering a heart attack in the next three to five years, should he not take proper precautions. Official medical records show a rise in coronary calcium scores from 34 in 2009 and 98 in 2013.

The physical also revealed increases in cholesterol and LDL levels.

In response, Jackson has increased the dosage of the president’s cholesterol-lowering medication, a statin drug known as Rosuvastatin, and recommended he take up an exercise regimen and maintain a low-carbohydrate and low-fat diet.

He says though that the appearance of having “good genes”, as well as not drinking or smoking, have enabled Trump to avoid the common symptoms associated with heart disease.

The president also underwent an echocardiogram and stress test, both of which came back normal.

In addition to his physical, the president also underwent a voluntary mental fitness examination, the Montreal Cognitive Assessment, which is used to detect mild cognitive dysfunction. The 30-point test assesses memory, language, recall and visual skills through a variety of tasks with a score of 26 declared normal. Trump completed all 30 questions correctly.

The White House is currently reviewing a request for comment, as stated in an email sent to this reporter.