Gadolinium could light way to stroke assessment through the eyes 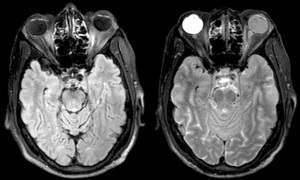 Researchers have found that stroke
can enable gadolinium to collect in
the eyes and highlight bright spots that
may provide insight for assessment
and treatment
Compromises to the blood-ocular barrier during stroke could make the human eye a gateway for stroke assessment.

Researchers from the National Institute of Neurological Disorders and Stroke (NINDS) of the National Health Institute claim that such compromises enable gadolinium to leak into eyes during MR exams and highlight bright spots on patient images, potentially providing insight into their strokes and the best course of action for addressing them. The findings were published in the journal, Neurology.

“One of the challenges in treating patients with a possible acute ischemic stroke is that the patient needs to have brain imaging prior to initiating treatment,” Richard Leigh, assistant clinical investigator of the Neuro Vascular Brain Imaging Unit at the Intramural Stroke Branch of NINDS and the lead author of the study, told HCB News. “With this study we found that changes in the eye, which is more easily evaluated than the brain, may be informative about the stroke process. It raises the question, could a direct evaluation of the eye be used instead of more cumbersome brain imaging when making rapid decisions about stroke treatment?”

Compromises to the blood-brain barrier during stroke enable gadolinium to leak in and create bright spots on the brain that indicate points of damage. Researchers found that the same approach could be applied to the eyes, as the blood-ocular barrier can also experience damage during these episodes.

The study examined the MR scans of more than 167 stroke patients upon admission to the hospital who were not injected with gadolinium, comparing them to images from exams conducted two and 24 hours later with the contrast agent.

Gadolinium leakage in the eyes occurred in 66 percent of patients during the two-hour exam with the substance typically found in the aqueous chamber, and in 75 percent during the 24-hour scan with it located in the vitreous chamber.

Those with gadolinium in the vitreous chamber at a later time were usually older, with a history of hypertension. They also possessed more white matter hyperintensities on their brains, a sign of the mind’s aging and reductions in cognitive function.

Leakage occurred in both eyes for a minority of patients in the two-hour exam, in which strokes affected a larger portion of the brain and inflicted more damage to the brain-blood barrier compared to those with slower patterns or no signs of leakage.

It is still not known if gadolinium can enter the eye of a healthy patient, and further research is required to fully understand its impact.
1(current)
2