Q&A with Dr. Camran Nezhat, the father of video endoscopy 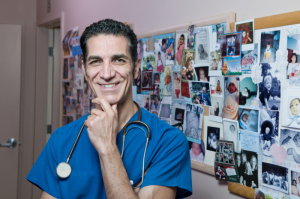 Camran Nezhat with photos of patient
babies resulting from treatment.
In his quest to move the surgical field away from open, invasive procedures to closed operations using small incisions, tiny endoscopy cameras and miniature surgical tools, Dr. Camran Nezhat has endured near persecution.

As a young Iranian medical student (and now an American citizen), he recalls that physicians opposed to the paradigm shift from the way surgery had always been done – big, open incisions that were hard on patients – even reported him to the Justice and Immigration departments and the IRS. But, he persisted, and along with his two brothers who are also U.S. gynecological surgeons, Dr. Nezhat has taught the art and science of endoscopic surgery to thousands of surgeons worldwide

In addition to caring for his patients, he also collaborates with some of the leading medical technology companies to help develop improved video endoscopic and robotic surgery techniques. HealthCare Business News recently had the opportunity to speak with Dr. Nezhat about his work.

HCB News: How did you first become passionate about laparoscopy and minimally invasive surgery?

Dr. Camran Nezhat: It started at an early age. As a high school student, my parents sent me to shadow a surgeon. There, I witnessed a cystoscopy. The surgeon struggled to show me a stone within the patient’s bladder. He hunched over the patient’s body peering through the shaky scope, taking four attempts before I was finally able to see the stone in the bladder. I asked him why doesn’t he put a camera on the scope and watch it on the monitor? He laughed and said, “son, are you becoming an inventor?”

I later became familiar with endoscopy when I started medical school, where my professors demonstrated the same endoscopic technique that I had witnessed years prior. It was during my residency that one of my brothers required minor surgery on his knee, through a large incision, that I realized medicine was desperately in need of a change. I carried this passion and motivation with me into my training, where I was able to transform my vision into a reality.

HCB News: Can you give us a little history on your role in the development of minimally invasive and robotic surgery?

CN: All throughout my training, I empathized with countless patients suffering from the postoperative pain and complications associated with laparotomies. In comparing recovery time and pain between laparotomy and diagnostic laparoscopy, I asked myself, “Why shouldn’t we treat more surgical pathologies laparoscopically?”

I set out to refine laparoscopic procedures in hopes of operative laparoscopy becoming the new surgical norm. Through the ‘80s and ’90s and later, many of my mentors and other physicians were encouraged by my efforts, including Dr. David Stevenson, senior dean at Stanford University, who told me: “You have a story to tell. Don’t stop. Keep going. Your work is helping patients.” 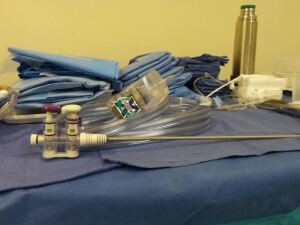 Dr. Nezhat's original scopes from the 1980s.
Unfortunately, my vision was too advanced for the technological capabilities available during this period. The available technologies just would not accommodate all the visions in my head. My earliest attempts to work off the monitor using video equipment produced such murky images of the abdomen that just about everyone was either laughing or crying. I maintained my motivation and established relationships with medical device companies. These companies began customizing cameras and light sources for me. I was then finally able to demonstrate the laparoscope’s potential in the operating room.

Progress happens when there is collaboration between disciplines. From the beginning, I have collaborated with surgeons from many different disciplines, including general surgery, colorectal surgery, urology, thoracic surgery, neurosurgery, endocrine surgery and oncology, among many others. 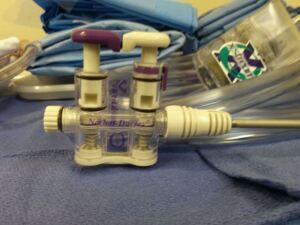 What the older scopes looked like.
While it took more than 30 years, the medical community finally came to realize what I already knew. Not only did operative laparoscopy edge into the realm of mainstream acceptance, but also new technologies began pouring forth. Patients were at last being freed from an era where multiple laparotomies were the norm—meaning, minimally invasive procedures overcame their diagnostic fate to finally be accepted as the standard of care for treatment and cure. With the medical community’s acceptance of operative videolaparoscopy with and without robotic assistance, more opportunities came for technological advancements.

In order to further improve my techniques, I developed several tools, and was involved in developing the da Vinci Robot with Dr. Ajit Shah and Phil Green at the Stanford Research Institute. Collaborating with surgeons from other disciplines, we performed the most advanced surgical procedures laparoscopically for the first time, thus blazing the path for surgeons all over the world to help their patients. Some of these procedures included bowel, bladder, ureter, diaphragm resections and reanastamosis, as well as radical hysterectomy, pelvic and paraaortic node dissection, fistula repairs, treatment of extensive endometriosis involving multiple organs, treatment of advanced ovarian cancer, Cesarean section scar repair and many other procedures.

As operative laparoscopy became more accepted, I was sought out to teach others on how to perform these new techniques. I have since dedicated my life to teaching and training other surgeons on minimally invasive techniques.

HCB News: It’s been a long road getting the medical establishment to see the benefits of minimally invasive procedures. Tell us a little about the acceptance of laparoscopic surgery over the years.

CN: When an idea is new, they say it is not true. If many years pass and that idea is proven to be true, then critics will say that it is not important. As more years pass, and the idea is proven to be important, the critics will say that it is no longer a new idea. I have experienced this over and over in my career. But you can’t hide the truth forever, and that’s what has happened. Throughout my career, I have been confronted by vocal critics. They meant well and they had good intentions, but it was not their brightest moment.

Also, as older doctors have retired, the younger generations of doctors believe the studies [demonstrate] that patients do better, with fewer complications, have a faster recovery and have a lower total cost. There are countless advantages for the patients, their families and society. However, we still have a long way to go to convert everything to minimally invasive surgery.

HCB News: Where else is your focus these days?

CN: I have been trying to innovate and make minimally invasive surgery more accessible to the people of the world [and to] make it better and faster and more economical, because, simply put, minimally invasive surgery has better results. That has been my goal and I have developed many products and instruments to provide a means to that end. I’m working on and collaborating in a couple of other areas, a major one of which is surgical robotics.

Because minimally invasive approaches are so much more beneficial to the patient, companies see this as an opportunity to develop products to help people with their healthcare, to assist the surgeon and to create value for society. 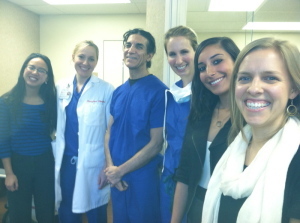 Camran Nezhat with staff.
The combination of high-tech and self-monitoring devices that we call “wearables,” and new surgical techniques being tested in the U.S. and around the world, mean things are rapidly going to change. For example, many of these procedures will be performed by interventional radiologists, using incision-less surgery and molecular energy. Virtual reality surgery, robotic surgery, telemedicine … it’s already here, and with these new innovations, it’s going to get better and better.

HCB News: What do you see as the future for minimally invasive surgery?

CN: As I have said for decades, anywhere in the body that a cavity exists or can be created, endoscopic surgery is possible and usually preferable. The limiting factors are the skill and experience of the surgeon and the availability of proper instrumentation. Some of the most advanced procedures, which more than 20 years ago we showed can be done by laparoscopy with all the benefits of a quicker recovery, are still being done by laparotomy. Gradually, such procedures are going to be converted to almost always being performed by laparoscopy. As time goes on, these major surgeries will be converted to minimally invasive approaches, necessitating better training of surgeons across all disciplines.

The technology is expanding exponentially now. Surgery in the next 10 to 20 years will be totally different. At long last, more and more surgeries are being performed laparoscopically and there will consequently be more and more enabling devices, like next-generation robots.

In the future, we will have procedures that robots will do nearly fully on their own, and surgeons will act as a moderator to ensure safety, and ultimately interventional radiology and incision-less surgery will replace all surgeries.