Philips and IIT unveil tele-ultrasound solution for Lumify at AIUM 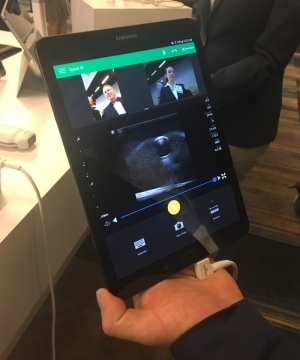 The solution, based on Philips’ Lumify app-based ultrasound and powered by IIT’s React collaborative platform, made its debut yesterday at the 2018 AIUM Annual Convention in New York City, with attendees witnessing firsthand its two-way audio-visual call and augmented reality capabilities for remote virtual guidance, supervision and training.

“The main thing we wanted to replicate is the experience of having two physicians in the same room, seeing the same thing and talking about the same thing to understand what point they’re at,” marketing director Ashley Cappel and digital content marketing manager Luke Baldwin for Philips told HCB News. “We have a shared camera, audio, remote pointer and interaction. This, at the basic level, is what we’re launching here.”

Powered by Reacts and downloaded as part of the Lumify app, the solution offers experts in different locations access to visuals in real-time and the ability to communicate with one another for guidance and consultation. It can be used in Wi-Fi and cellular settings, making it an ideal tool for remote, rural and low resource communities.

Users begin React sessions with face-to-face conversations on smart devices. Following this, the clinician who is physically present with the patient can switch the camera to front-facing view to show the virtual clinician the position of the probe.

Both sides can view this and images of live ultrasound simultaneously with the virtual end having the option to request permission to record sessions. If such permission violates patient privacy, the present physician can deny it and instead transmit their own recorded images and videos to the other party.

In addition to guidance, the solution can be used to teach medical students correct probe positioning and anatomy through virtual ultrasound rounds, and can be used in ambulances to expand care delivery upon arrival.

Such a technology, according to Yanick Beaulieu, president of IIT, reduces the amount and costs of expensive equipment required for exams.

“When a user wants to do this type of endeavor, they have to have the setup. By removing all these pieces and having just the tablet, versus thousands of dollars of equipment, [they'll] be able to do this remote session,” he told HCB News. “The frustration of an educator or a student is [that] there are lots of students but not many trainers. People have to go to courses and take time away from work. Now, you just have to ask, ‘Are you available tomorrow for an hour. Bring your tablet and we’ll collaborate.’”

Lumify was cleared by the FDA in October 2016, and was recently adopted by professional soccer team, PSV Eindhoven. It is available in North America and parts of Europe and Asia. Reacts is currently used in 28 countries.

Current Lumify users will have the option to upgrade the app to include Reacts.

Full integration on the app can be downloaded from the Google Play app store, with shipping to begin in mid-April.