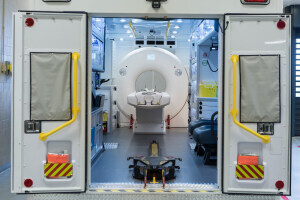 The establishment of the program will enable fire protection districts and ambulance services to contact the MSU to assist patients who show signs of stroke. Its creation follows the unit’s first year of service in which it proved to offer access to lifesaving treatment 30 minutes faster than traditional forms of transport.

“The timing has helped us hard-wire our processes over the course of the year to be better equipped and knowledgeable, to expand our scope to other EMS systems,” Mehr Mohajer-Esfahani, program manager of Northwestern Medicine Central DuPage Hospital Mobile Stroke Unit, told HCB News. “The success of the MSU is predicated on a good partnership with the EMS agencies that we collaborate and work with. We train with all these entities and build professional relationships that aid in fostering stroke care to the community.”

Unlike most MSUs that are equipped with 4-slice CT scanners, the Northwestern unit performs detailed brain scans with a 16-slice CT designed by Siemens Healthineers.

It also is stocked with stroke-specific medications, including tPA to administer for the treatment of ischemic strokes.

As the clot-busting drug can only be administered following a scan to determine if strokes are ischemic or hemorrhagic, the MSU enables clinicians to make on-site determinations, thereby saving time for transport and allowing for faster deliveries of treatment.

A data analysis found that tPA was delivered, on average, 52 minutes after a 911 dispatch call with the mobile stroke unit; 30 minutes less time than with an ambulance, with 27 percent of eligible MSU patients receiving tPA within one hour of the onset of symptoms, in the first year of the unit’s service.

Depending on its estimated arrival time, the MSU may go directly to a patient or arrange to meet an ambulance part of the way. It is also equipped with a direct telemedicine connection to neurologists at Northwestern Medicine Mobile Central DuPage Hospital.

Mohajer-Esfahani says the unit enables patients to be diagnosed and receive treatment in the "golden hour," the first 60 minutes in which the onset of symptoms occur, and when patients are more likely to have better outcomes. Less than one percent of patients were treated with tPA in the U.S. within the golden hour, according to a 2014 JAMA study.

“The Mobile Stroke Unit capitalizes on telemedicine technology and we utilize it to send encrypted data to physicians as well as live streaming physicians to interact with patients and the MSU crew,” he said. “The application of these methods allows for rapid triage, diagnosis, and treatment of patients prior to leaving the scene.”

The mobile stroke unit is the first of its kind in Illinois, serving the hospital’s EMS area, which includes Carol Stream, Glen Ellyn, Roselle, West Chicago, Wheaton and Winfield. The hospital is working to expand its services to the far western suburbs of Chicago.