Taking the mystery out of breast density 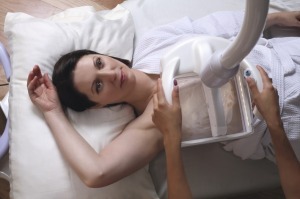 Ten years ago, any level of information about breast density was not required to be shared with women after their mammogram.

Now such a fact or general summaries on the topic are required in more than 30 states with Wisconsin being the most recent to pass a bill on the matter, spearheaded by U.S. Representative Mike Rohrkaste."

For Rohrkaste, inspiration came from constituent, Gail Zeamer, a Neenah resident diagnosed in 2016 with stage 3C breast cancer that had spread to her lymph nodes. Zeamer, who had received three normal mammograms over the last two years, found out she had cancer through an ultrasound scan. When asked why it was not detected on her mammograms, doctors told her it was because she had dense breast tissue which masked the tumors from being seen during the exams.

When she asked why she had not been informed of this, doctors simply said they did not tell patients that information. Shocked and angered, Zeamer contacted Rohrkaste and other constituents to form a law that would require doctors to inform women of this matter so that others would not go through her ordeal.

“This is a good first step because women are now alerted to this in the report that goes to them,” Rohrkaste, told HealthCare Business News, adding that his own wife, also named Gail, knows she has dense breasts because of his involvement in the matter. “This will help educate doctor’s offices and lead to questions by providers and patients.”

Zeamer’s story is one shared by women worldwide who only learned what breast density was when informed that it was the reason why their mammograms did not detect their cancer earlier.

But legislative efforts, research, and technological advancements are putting breast density at the forefront of a national conversation, according to experts who hope that such discussions will lead to greater awareness among professionals outside of radiology and enable earlier access to treatment.

Lack of awareness
About 40-50 percent of women throughout the U.S. have dense breasts. A 2017 study of 200,000 patients published in the JAMA Journal of American Association Oncology found breast density outweighed all other risk factors for breast cancer, including family history.

“I think that’s significant because practitioners and patients have been under the impression that if they have a family history, there’s a risk there. If they don’t, it’s not a problem,” said Dr. Monica Saini, a consultant diagnostic radiologist for Volpara Health Solutions. “This is incorrect because radiologists know that when we diagnose breast cancer, about 70 percent of those are cases where women have no family history.”
1(current)
2
3
4
5