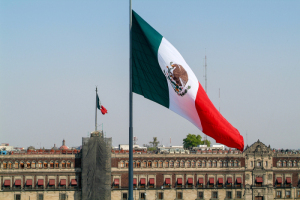 Last week after AAMI, I travelled to Mexico City to attend ExpoMed. It turned out to be a really great opportunity.

The show was very well attended. If I am not mistaken, there were 10,000 people there.

There were buyers from all over Latin America, as far away as Argentina.

Oddly enough, there were not that many Americans there, but there were a few.

I would say that 60 percent of the attendees only spoke Spanish. However, we hired a translator from Mexico City, and she did a beautiful job and learned the introduction to our company in no time at all.

The people in Mexico, are unbelievably nice. And although some of you may have the view that Mexico is not as economically developed as the United States, I am not sure that is 100 percent true.

It is true that things cost less there. A lovely dinner for four at a fancy restaurant, is less than $100.00 and the food is delicious. An average MRI scan is only $250.00.

I really can't say enough about what a wonderful culture it is.

The people at the show were interested, and they went out of their way to visit with us. In three days, we met with over 350 different companies. I am proud to say that many of them were already familiar with DOTmed and had a favorable view of us.

The independent and third party service business, is very well developed there but in-house service seems almost to be non-existent. I spoke with several hospital administrators about the idea of having in-house healthcare technology managers, or biomedical engineers, and I could tell by their reaction it is something they have not thought of before.

This is a show that we immediately signed up for next year's event.

By the way, the show managers could not have been more accommodating. The director of exhibitions, Rosario Garzon, was a very nice lady and seemed to care about the exhibitors.

I was very impressed with this show, and I am very glad I attended.