My visit to SouthWest Medical Resources 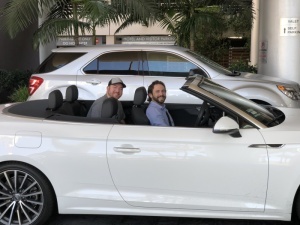 Donny and Colm in the Audi A5
In July, I stopped by SouthWest Medical Resources for a tour of their facility. Boy, do those people have a lot going on. Don McCormack (the father) is sort of a modern day Leonardo Da Vinci, constantly inventing things. He is enthusiastic and high energy and you can't help but to be in a good mood when you are around him.

One of his designs is a remote monitoring system for MR magnets. He came up with this idea in an effort to try and predict failures before they occurred to save his customers the cost of downtime or wasted helium.

Honestly, I am not sure who in the marketplace first came up with this idea. I know we are going to be writing a story about this in an upcoming magazine issue but anyway, Don was one of the earliest adopters.

It really is a slick idea because it is a service of SouthWest can offer their clients, and it also helped the company to be more efficient and thus, more profitable.

Don's son, Mike, is the guy in charge of this and he was able to explain to me how everything worked and all of the different parameters they can check, and what happens if they either see a failure, or expect one. There was an assembly line of people building these units and from what I understand, they're installed all around the world.

Next, we went to a room where there was a sort of mad scientist testing coils and GE MR parts. SouthWest specializes in GE MR and they have all sorts of parts from all different vintages.

I forget exactly how big the warehouse is, but I want to say it is more than 100,000 square feet and it is filled with all sorts of parts and components.

From there, we went to a cold head shop where the people from SouthWest rebuild cold heads and test them. As we know, there are a number of companies that offer this service but once again, it gives SouthWest an advantage to be able to preform this work in-house.

Colm Ford was with me for the tour and as we arrived, a trailer was leaving that had been refurbished, and it looked new. SouthWest isn't the only company refurbishing trailers, but they definitely do a first class job.

Don's son, Donny, is taking more of an active role in the management of the company, and I believe he is taking an active role in service. He is an extremely charming fellow, and he let me drive his Audi A5 convertible, which is quite a fun car. I don't know whether I am more jealous of his youthful good looks, or his car!

I had the good fortune to see Don's wife, Jennifer as well. Whenever I see them together, they seem like such a lovely couple.

SouthWest has a really energetic team, and I was really impressed with my visit. I am quite sure that they will continue prospering and thinking outside of the box for many years to come.