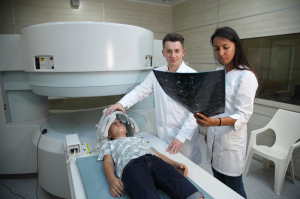 Patients who undergo CT scans may
be prone to develop brain tumors
later in life, according to a
Dutch study
Going for a CT scan? Be careful. You might get brain cancer.

Such a query has been the subject of debate among numerous healthcare professionals worldwide and is once again in the spotlight following the release of a new study by Dutch researchers who suggest that exposure to radiation during CT imaging may place a person at higher risk of developing brain tumors later in life.

“Our work is an important addition to the evidence of cancer risks at low radiation doses, supporting extrapolations from the A-bomb survivors and other populations exposed to higher levels,” Michael Hauptmann of the department of epidemiology and biostatistics at the Netherlands Cancer Institute and an author of the study, told HCB News. “This knowledge informs regulation of exposures to patients and personnel in hospitals, nuclear workers, airline personnel and other exposed groups. It also directly supports radiation protection standards in medical imaging, and proposes their implementation wherever this is not yet the case.”

The use of CT scans has risen significantly over the last two decades due to their enhanced diagnostic capabilities. Performing these exams, however, exposes patients to greater amounts of radiation compared to other imaging modalities, a fact that has created cause for concern, particularly among children, who are more susceptible to radiation-related malignancies than adults and have more time to exhibit the effects of this possible risk.

In their study, researchers evaluated CT scans of 168,394 children examined between 1979 and 2012 to determine if such exposure led to the development of brain tumors or leukemia, the most common malignancies incurred from radioactivity in young adults and children. Dose-response relationships were also calculated based on observations of radiation dosage to the brain.

Overall cancer incidence was 1.5 times higher than expected, while increases in relative risk, based on all brain tumors combined as well as malignant and nonmalignant brain tumors separately, reached between two and four for the highest dose category. No association was found for leukemia, with bone marrow exhibiting low findings of radiation dosage.

Hauptmann warns that while significant, the results of the study should not dissuade patients from avoiding CT all together.

“The principles of radiation protection, justification of imaging and optimization of doses, should be followed everywhere according to the standards,” he said. “Then, the benefits should exceed the risks and forgoing a procedure could be dangerous. Absolute risks from low-dose radiation are much lower than other health risks we happily take every day.”
1(current)
2