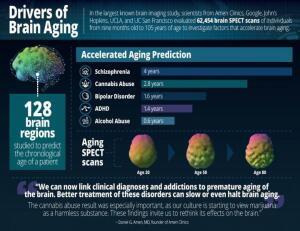 Psychiatric disorders and drug abuse may
prematurely accelerate brain age
U.S. researchers have compiled over 60,000 SPECT scans in what is being touted as the largest brain study ever to be conducted.

In sifting through images for more than 30,000 patients, teams at Amen Clinics, Google and various universities have come across new substantial evidence that illustrates the effects of various disorders and drug abuse on the aging process of the brain, based on the state of its regional cerebral blood flow.

“Blood flow and activity is a leading indicator of aging before anatomical studies, which is why we evaluated it with SPECT regression algorithms to assess activity patterns over age,” psychiatrist Daniel G. Amen, founder of Amen Clinics and lead author of the study, told HCB News.

Various disorders reduce regional cerebral blood flow, affecting brain aging, but with treatment, can be slowed or even halted in some cases.

Researchers predicted the chronological age of patients, which spanned from nine months to 105 years old, by studying 128 brain regions in 62,454 scans and using SPECT regression algorithms. A prediction of older age compared to actual chronological age in patients was defined as accelerated aging.

Those afflicted with schizophrenia showed an average premature aging of four years. Aging for bipolar and ADHD individuals accelerated 1.6 and 1.4 years, respectively.

Abuse of alcohol accelerated aging by 0.6 years while marijuana users were predicted to be 2.8 years older than their actual age.

No links were found to depression or actual aging, which researchers hypothesize as being due to a reliance on different types of brain patterns for those disorders.

The findings, according to Amen, indicate cerebral blood flow to be an efficient predictor of age. Furthermore, they illustrate a greater understanding of how the brain operates throughout its entire lifespan, and how psychiatric conditions and different substances may influence its functioning and processes over time.

“In addition to treating these mental health conditions as well as adding brain healthy lifestyle interventions, we need to stop thinking of alcohol as a health food and marijuana as innocuous,” he said.

The study was published in the Journal of Alzheimer’s Disease.