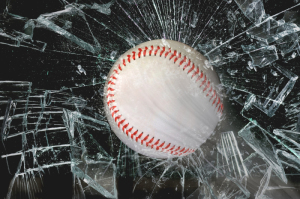 About 60 years ago I was playing catch with my friend in our side yard. My dad repeatedly warned me not to play in the side yard for fear I would throw a ball through our neighbor's window.

As luck would have it, the ball hit Mrs. Johnson's kitchen window and cracked the glass but bounced off onto the ground.

So, I picked up the ball and ran!!

I am sure that Mrs. Johnson called my mom and my mom called my dad and when my dad came home he asked me if I had anything to tell him. Of course I said no, because I was afraid and ashamed and I thought the evidence of my ball was still in my room.

My dad went on to say that when I am a man, if I want my parents to be proud of me I have to be honest. He also said that people who do not tell the truth will never be trusted by others.

At that point I admitted the window damage was caused by me.

My dad said very good, my mother cried and I felt better.

Next my dad sent me over to apologize to Mrs. Johnson and offer to cut her grass for the rest of the season to cover the cost of the window. (Mrs. Johnson normally paid me to take care of her lawn.)

I was afraid to go to see Mrs. Johnson but I did. I also lost ice cream for a month.

Today... 60 years later, I remember this moment and I have learned the importance of admitting when I am wrong and sometimes offering an apology.

Politics aside, I think Mr. Trump was wrong to suggest that John McCain was not a war hero and to now, after his passing, not honor him.

I suspect that Mr. Trump knows he is wrong on this issue but he is not willing to back down.

For this reason I feel bad for him because his ego prevented him from admitting he was wrong and from offering an apology. Now he will never have the chance.

I think back about my dad and how much better I felt after I apologized to Mrs. Johnson. I feel bad for Mr. Trump because he missed the chance.