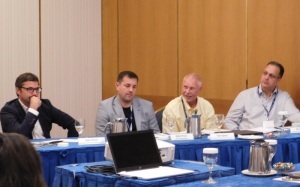 Panelists for our discussion on European
parts, service and equipment
Last week, I was in Athens for the 14th Annual IAMERS European Meeting.

There were 33 companies represented and about 75 people total.

Barbara joined me as she always does, because it’s not only a business meeting, it’s also a social event.

Diana Upton, the IAMERS President, always selects an interesting venue and this was no exception. We stayed at a five-star hotel with a spa on the shore on the Athens Riviera.

They were several dinners and a cocktail reception, and one off-property dinner that had the most stunning view.

However, the meeting was not all about fun and networking.

There’s a lot happening in Europe and I left the meeting with several interesting takeaways.

Rafael Provencio from Althea spoke eloquently on the subject of third-party service in Europe and cited Italy as an EU country with a particularly strong healthcare system.

Ford Shanahan, an attorney for Althea who introduced Rafael, spoke about some of the regulatory challenges that anyone wanting to do business in Europe must keep in mind.

Of course Rob Kerwin, the in-house counsel for IAMERS, provided an update as well, and Alexandros Manousakis, from ALG Manousakis Law spoke on the impact of GDPR.

The subject of importing into the U.S. was addressed by Victor Cruz.

Martina Pieper from Philips/Dunlee spoke about the new ER MDR challenges for OEM's as well as third-party service providers. She did an excellent job of summarizing 97 articles on this subject and making a complicated subject easy to grasp.

As part of the event, I helped Diana put together a panel of experts to discuss equipment, parts service and sales in Europe.

This was an excellent session if I do say so myself. We covered a wide range of topics and the panelists seemed to agree on some high level points. For example, the consensus was that alternative service— whether by hospital personnel or ISO— has not grown in the EU because end users are afraid.

Another point of agreement was that Africa is a growing market, and that between regulations and the OEMs, the expansion of alternative service, parts and sales is an uphill battle.

Our journalist, John R. Fischer was at the event and I encourage all of you to read his analysis of the panel.

IAMERS is doing great work, and in many ways is helping to lower the cost of healthcare where it is needed most.