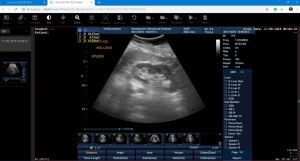 SonicDICOM enables SUI students to
send and view their ultrasound studies
converted into diagnostic reports
Software manufacturer JIUN Corporation has deployed its SonicDICOM PACS system at Sacramento Ultrasound Institute as part of a new agreement between the two organizations.

The launch of the system equips the California institute with the Japanese enterprise’s web-based DICOM Viewer and DICOM Server, both of which are accessible online through SUI’s student portal.

“There was no way to integrate our student portal to the previous PACS without a large investment in developing the proper integrations,” Samuel Yarmagyan, chief operating officer for Sacramento Ultrasound Institute, told HCB News. “In order to view a study, students and faculty would need to use specific computers that had the required software installed and configured.”

The previous PACS system was also limited to SUI’s internal network, a fact which prevented professors from grading student studies off-campus. In addition, single sign-on could not be implemented, requiring additional IT support to maintain two independent systems.

Use of SonicDICOM requires no additional software installations and enables students enrolled in the ultrasound and echocardiography programs to send studies learned in class to instructors and radiologists for interpretation.

This provides them with a firsthand look at how ultrasound studies are converted into reports that are used for the diagnosis of patients, said Yarmagyan.

“The SonicDICOM system that JIUN Company developed was the only system out of a number of PACS we tested that could be seamlessly integrated with our learning management system. It was also one of the only PACS that allowed our students to view their images online without the need to install additional software.”

The move by SUI is similar to that of Oregon Community Imaging, which recently chose Digisonics to install its structured reporting solution to streamline ultrasound reporting workflows for the facility’s OB/GYN, Vascular and General Ultrasound studies, establishing interoperability between its incumbent vendors including Epic, Philips and GE.

Composed of 25 ultrasound systems on a 12,000 square foot campus, SUI holds national institutional accreditation by the Accrediting Bureau for Health Education Schools and is approved by the U.S. Department of Education to participate in Title IV/Federal Financial Aid programs.