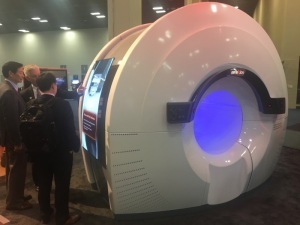 RefleXion BgRT PET system
RefleXion Medical kicked off its first-ever appearance at the ASTRO Annual Meeting this weekend in San Antonio, Texas with demonstrations of its biology-guided radiotherapy PET system.

A work in progress over the past 10 years, the solution is designed to treat all forms of cancer at any stage, including metastatic disease, as well as detect and deliver treatment to tumors in motion. The company plans to submit it for FDA clearance at the end of this year.

“Metastatic patients don’t get radiation therapy at all but instead, systemic therapies such as chemotherapy or other drugs,” Todd Powell, president and CEO of RefleXion, told HCB News. “This system creates an opportunity for radiation oncologists to use radiotherapy for systemic therapy. Radiation therapy has fewer side effects, less toxicity, and is very well understood in terms of patient tolerance. Additionally, we believe we will be able to complement emerging therapies such as immunotherapy, and even existing chemotherapy with safe and effective radiation.”

Conventional systems are capable of localizing, identifying and tracking one or two tumors close together, a common indication of early stage cancer. Multiple tumors, though, indicate more advanced forms that such technology is not designed to address. In addition, the motion of tumors often makes imagery useless for real-time guidance due to the time required to produce images.

By injecting FDG, a common PET tracer, clinicians are able to use the BgRT system to locate tumors, with the cancer cells consuming the agent. The glucose-based compound then breaks down, producing emissions that are picked up by the machine’s two arcs and PET scanner in real-time. The emissions cause the tumors to light up, immediately revealing their locations to clinicians who can track them even as they move.

The duration of such exams is shorter, due to the system’s ability to spin 60 times faster than conventional PET solutions, with patients experiencing greater comfort and less claustrophobia within the machine’s 85 centimeter bore.

In preparation for the eventual clearance and sale of the system, the RefleXion Consortium, made up of RefleXion and 11 partners, is working to ensure that the system will be available for use with efficient reimbursement rates.

“We’re working to understand and ensure that they will be able to use existing reimbursement codes for patients that we’re treating, whether it’s early stage cancer or late stage cancer,” said Powell. “But we also have a parallel strategy along with that, that seeks to gain additional and incremental reimbursement that we will drive through the appropriate societies and agencies.”

Following FDA clearance, RefleXion expects sales to commence within the second half of 2019.