Report on this year's RSNA 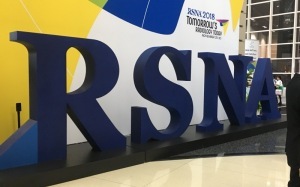 I am on a plane flying home from Chicago and RSNA. This year's meeting was another great event.

It started with the opening ceremony on Sunday at 8:30am. And by the way it started exactly on time. There were about 3500 people in attendance in the auditorium and more seated outside.

There were a series of awards and then Dr. Rao the RSNA president imagined what the world of radiology would be like in the year 2043. Dr. Recht of NYU Langone gave a keynote speech where he described the innovative things his department is doing now. Click the links to see coverage of these speeches by our reporter, John Mitchell.

If you are not living under a rock you know that diagnostic imaging is changing for the better thanks to AI and machine learning and this was evident on the show floor.

There were 26,000 professional attendees and 650 exhibits at the show.

There were no big surprises at the show but we did have a blizzard that caused a lot of people to miss their flights (including some of our own team).

We are looking forward to next year.