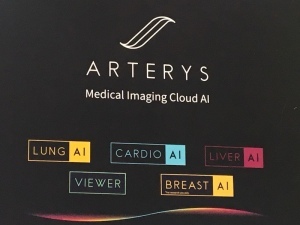 Arterys announced the launch of lung and liver AI applications in addition to its cardiac MR AI application for the company’s medical imaging cloud AI platform at RSNA 2018 in Chicago.

“We have over one billion annotated images in our data sets to help make medical imaging services vastly more automated, quantitative and useful,” John Axerio-Cilies, Ph.D., CTO, and founder of Arterys told HCB News, adding that all of their apps are designed to fundamentally enhance the radiologist's workflow while assuring interoperability.

He also said that no other AI company has matched Arterys’ clearance in 98 countries (including FDA approval in the U.S.) and the security offered by its native cloud platform, which differs from the general cloud. Native cloud creates a “single, central mind” that deidentifies data to protect it from hackers, according to Axerio-Cilies.

In short, he said, it creates a security standard that is unmatched.

Currently, there are 260 daily users on the Arterys network, primarily using its cardiac MR application. Its platform is HIPAA and EU GDPR-compliant and integrates with existing health records (EHRS), PACS and RIS environments and dictation solutions.

Arterys plans to fully introduce breast and viewer AI applications in 2019, which were being demonstrated at RSNA earlier this week. Axerio-Cilies said the company’s guiding goal is to reduce variability in clinical diagnosis and alleviate the growing workload faced by radiologists.