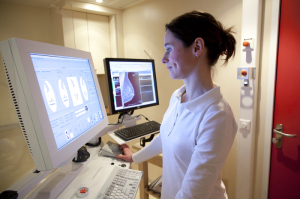 A retrospective study out of the U.K. has found that digital mammography increased overall cancer detection rate by 14 percent with no change in recall rates.

The study, posted online this month in the journal Radiology, also found a “substantially higher” detection of grade 1 and 2 early-stage, invasive cancers, including both ductal and lobular cancers, with digital mammography.

The researchers analyzed annual screening data from the 80 facilities involved in the English National Health Service Breast Cancer Screening Program – which has been running for nearly 30 years and is now fully digital – combined with estimates of digital mammography usage. Overall, they were able to look at 11.3 million screening exams performed on women between the ages of 45 and 70.

“It was from this data set that the change with digital became apparent, and we decided to publish it, as it is such robust data and not confounded by other factors changing over the time period of the study,” Dr. Rosalind Given-Wilson, a radiologist at St. Georges University Hospitals NHS Foundation Trust in London and a coauthor, told HCB News.

The study found that between film and digital mammography, there was no change in the detection of grade 3 invasive cancers, which grow faster and are more likely to spread than the other cancer grades.

The program converted to digital over the time period of the study, Given-Wilson said.

“Looking back at film screen mammography at the beginning of the study, we see a similar difficulty with detecting grade 3 cancers,” Given-Wilson said. “It does not appear to have worsened with digital, but also has not improved.”

The researchers are looking further at how optimizing digital mammography images for the specific radiological features of grade 3 cancers, which are often nonspecific and ill-defined soft tissue densities, can aid in detection.