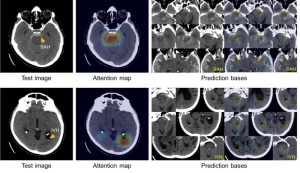 A possible tool for assessing patients with symptoms of potentially life-threatening strokes, the system is capable of producing a quick diagnosis and explaining the reasoning behind it, offering confidence to facilities which may not have access to specially trained neuroradiologists, and addressing the so-called “black box” challenge, in which systems are unable to explain how they arrived at a decision.

“In medicine, it is especially hard to collect high-quality big data. It is critical to have multiple experts label a data set to ensure consistency of data. This process is very expensive and time-consuming. Some critics suggest that machine learning algorithms cannot be used in clinical practice, because the algorithms do not provide justification for their decisions. We realized that it is imperative to overcome these two challenges to facilitate the use in health care of machine learning, which has an immense potential to improve the quality of and access to care," authors Sehyo Yune, the director of researcher translation at MGH Radiology, and Hyunkwang Lee, a graduate student at the Harvard School of Engineering and Applied Sciences, said in a statement.

The FDA requires that all decision support systems provide data for users to review the reasoning behind their findings.

Trained on 904 head CT scans, the MGH solution classifies images into one of five hemorrhage subtypes, based on the location of the brain, or as no hemorrhage, reviewing and saving images from the training data set that most accurately represent the traditional features found in each classification. It then uses an atlas of distinguishing features to show a group of images similar to those of the CT scan under evaluation to explain its diagnosis.

The team designed the system to mimic the way in which radiologists analyze images, incorporating adjusting factors such as contrast and brightness for revealing subtle differences that are not immediately apparent, and the ability to scroll through adjacent CT scans to determine whether or not a finding on a single image reflects a real problem or is a meaningless artifact.