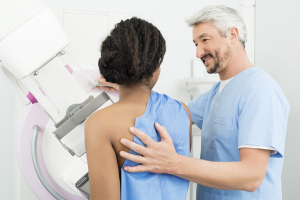 A new study says you may want to think twice about that, asserting that one third of women under 40 with no known risk for breast cancer undergo mammograms prior to elective surgeries such as breast reduction, costing them financially and putting them at risk of undergoing unnecessary follow-up exams.

"Altering screening mammography for patients younger than 40 years in the setting of evaluation for breast surgery has a risk for subsequent tests and invasive procedures," said study author Erika D. Sears, a Michigan Medicine plastic surgeon and an assistant professor of surgery at the University of Michigan, in a statement.

While a long-time practice for pre-surgical screening, no professional society recommends routine screening for women under 40. The American Society of Plastic Surgeons, for instance, suggests that women undergoing elective breast surgery should not seek additional screening beyond existing guidelines, unless there is a concern based on their medical history or a physical finding.

Physicians, however, often suggest patients undergo the exam, a fact that Sears describes as a misguided habit.

Examining records from 2009 to 2015 for 52,486 women of all ages, she found that 30 percent of women between 30 and 39 undergo mammograms prior to breast reduction surgery, a rate five times higher than that of other women their age. About four percent, ages 29 and younger, also received screening prior to surgery, compared to 0.2 percent of the population of millennial women.

None of the women reported a breast cancer risk, and were determined by the study to only be seeking a mammogram due to their upcoming surgery. It should be noted, however, that the risk may exist but was not listed in their records.

Following their breast reduction procedure, 14 percent of the women in their 30s then underwent an MR, ultrasonography or biopsy. Of these women, only 0.5 percent were found to have cancer.

"I think that if there's more awareness among patients, they may be motivated to have a conversation with their doctor about whether screening mammography is right for them," said Sears. "It's also about education on the provider's part about the downstream impact of future testing that women may experience."

But breast imager Dr. Stamatia Destounis says that women may not be aware of their family history and that in a majority of cases where breast cancer is detected, patients do not have any family history of the disease. She asserts that a mammogram, as well as MR and ultrasound tests, can make all the difference there, especially for women with dense breast tissue, a condition that affects half the population of women and makes it difficult to detect signs of cancer during physicals.
1(current)
2