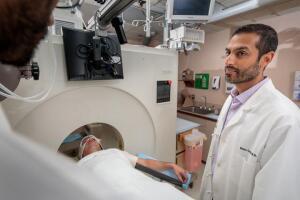 Dr. Manu Goyal overseeing a brain scan
A new PET imaging study that leveraged a machine-learning algorithm demonstrated that women’s brains appear about three years younger than men’s despite being the same age.

“We wanted to look at brain metabolism specifically, as it provides a window into the physiologic and functional status of the brain,” Dr. Manu Goyal, assistant professor of radiology at Washington University School of Medicine’s Mallinckrodt Institute of Radiology, told HCB News. “PET imaging provides the ability to look at certain aspects of brain metabolism that neither CT nor MR currently provide.”

Goyal and his colleagues at the university recruited 121 women and 84 men ranging from 20 to 82 years old for the study. All participants underwent PET exams to measure the flow of oxygen and glucose in their brains.

The researchers then determined the fraction of sugar used for aerobic glycolysis in different parts of the brain for each participant. A machine-learning algorithm was trained using the men’s ages and brain metabolism data to identify a connection between age and brain metabolism.

The team also performed the analysis in reverse by training the algorithm using the women’s data and applying it to the men’s data. That analysis found that men’s brains were 2.4 years older than their actual ages.

Goyal noted that the machine-learning algorithm was a major asset. It allowed them to reduce the multi-parametric data to a single value, which improved the signal-to-noise and statistical power simultaneously.

“I would argue that this approach to analysis of complex brain imaging is very helpful in general, as it allows one to perform a statistical 'omnibus' test and thereby lower the high risk of false positive findings that have been prevalent in biomedical research,” he added.

Based on the findings, the research team concluded that men start adulthood about three years before women and that continues throughout life. But more research is needed to determine what this means.

Goyal speculated that it could account for the fact that women don’t experience as much cognitive decline later in life than men. His team is currently following a cohort of adult participants to find out if people with younger-looking brains are less likely to develop cognitive problems.