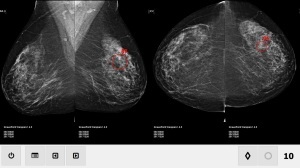 A new study says AI may be just as
accurate at detecting breast cancer
as human radiologists
The accuracy of digital mammograms is no different, regardless of whether a human or a commercially available AI-based system reads them.

That’s the claim made in a new study that found that AI-based readings are equivalent to those of human radiologists, suggesting that greater implementation of such systems is necessary and could prove helpful in reducing large numbers of patients waiting to be screened.

"In some countries, there is an alarmingly high number of breast screening radiologists set to retire in the next few years. For example, in the UK, one in five breast radiologists will retire by 2020 and one in three by 2025. In general, the incoming radiologists are not in numbers that are expected to replace the retiring ones," Ioannis Sechopoulos, an associate professor of radiology and nuclear medicine at AXTI laboratory and one of the paper's authors, told HCB News. "We are interested on how we can optimize breast cancer screening with mammography and breast tomosynthesis, the newest breast screening technology."

Breast cancer is responsible for approximately 500,000 deaths worldwide annually, an issue that has prompted clinicians to investigate other potential screening methods. While in development since the 1990s for breast lesion detection in mammography, no studies have shown improvements in performance or cost effectiveness with AI-based systems, hindering their adoption as a method, according to the study authors.

The hope of many is that use of these systems could potentially reduce the high labor intensity that current screening programs face due to the large number of women who require examinations.

The study examined the use of AI at a case level, comparing the performance of the Transpara system by ScreenPoint to that of 101 radiologists who scored nine distinct cohorts of mammograms from four different manufacturers as part of studies performed in the past for other reasons. A total of 2,652 exams were assessed and broken down into data sets, each of which consisted of findings that came from systems of four different vendors, and were assessed by multiple radiologists per exam. The combined number of interpretations by the 101 radiologists was 28,296.

The findings of the system were found to be statistically non-inferior to that of the average radiologist out of the 101, achieving a cancer detection accuracy on par with an average breast radiologist in the retrospective setting. Sechopoulos says that while the results are promising, additional steps are required and more variables must be assessed.
1(current)
2