The company has a target resolution of 2 millimeters for brain imaging. Currently, the resolution for the preclinical PET/MR is .8 millimeters, which Schellenberg said is similar to others on the market.

The BrainPET insert is also less of an investment than a combination clinical PET/MR scanner, Schellenberg said. 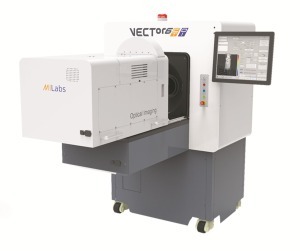 “In a clinic, some business from SPECT has moved toward PET imaging because of the higher resolution of PET,” said Frederik Beekman, chief executive officer of MILabs. “When G-SPECT enters the market, then this advantage of PET will be dramatically smaller.”

From a preclinical standpoint, the VECTor6 platform can be used to test new radiotracers on mice and other small animals.

“Some applications are unique for SPECT because of the unique tracers and therapeutic isotopes for SPECT,” Beekman said. “Before VECTor it was impossible to image those isotopes (at) such a high resolution.”

The preclinical device was awarded the Commercial Innovation Award at the World Molecular Imaging Congress in Seattle in September 2018.

The company is preparing to seek FDA and CE clearance for its clinical G-SPECT, and is currently finishing the redesign of the product, Beekman said.

"Previously these systems were very big and bulky," said Roel Van Holen, chief executive officer of MOLECUBES. "You can lift (our scanners) with two people. Installation takes two to three hours and it's plug and play."
1
2
3
4
5
6
7
8(current)
9