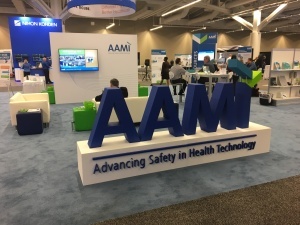 AAMI keeps getting bigger and bigger and more and more people attend. This year was no exception.

This year there were a lot more IT companies, but I guess that's not a surprise.

The meeting was in downtown Cleveland, very close to the baseball stadium and some of my colleagues went to watch the Cleveland team play the New York team. Unfortunately for those of us from New York, Cleveland won.

AAMI had a great exhibition hall and there were lots of good restaurants in the area.

I ran into many people I know. I also attended an awards ceremony and when it was over I was left with the feeling that there is a lot going on in the HTM community.

In many ways in-house HTM is on the frontline of the hospital and there was talk about how there aren't enough young people joining the profession. Let's hope that changes.

DOTmed made a modest donation to a scholarship fund so we are trying to do our part.

For me, a major highlight of AAMI was a Breakfast Symposium hosted by HealthCare Business News on Sunday morning. It featured a panel discussion about how manufacturers and the HTM community can work better together. It was well attended and our journalist, John Fischer, has written a recap of some of the perspectives that were shared during the event.

Equipment service within the hospital is becoming more important every year. It makes sense that the AAMI meeting is too.