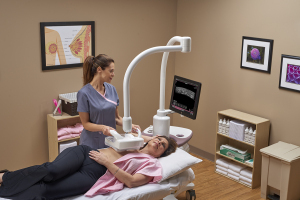 For those fighting for better diagnostics and treatment of breast cancer, February 15, 2019 was a day of victory. That was the day the U.S. approved a federal law requiring the inclusion of breast density reporting language within mammography reports to convey to patients and their physicians the status of a woman’s breast density, the risks associated with it, and information on additional screening options.

“This change will have a tremendous impact on women’s healthcare, allowing women to know if they’re at higher risk for breast cancer and potentially leading to earlier detection,” U.S. Senator Dianne Feinstein (D.-CA), a sponsor of the bill behind the law, told HCB News. “Too many women were told they have a clean bill of health following a mammogram, only to later find that dense breast tissue made a tumor difficult to see. Women will now be fully informed of their breast density and whether they should talk to their doctor about additional screening.”

While 2D and 3D mammography do a good job detecting cancer in fatty tissue, dense tissue can mask tumors, allowing cancer to go undetected and spread to other parts of the body. Knowing about breast density empowers patients to take a more proactive role in their care, and potentially pursuing secondary screening to rule out any diagnostic uncertainty.

Over the last decade, the majority of states have enacted their own laws around breast density reporting, but such laws vary in the context of the information they convey. “Some only provide general notification about breast density,” said JoAnn Pushkin, executive director of educational resource group, DenseBreast-info.org. “Others tell the women if she is generically ‘dense’, and others provide her actual density category. Some don’t mention density increases risk, and others don’t mention supplemental screening.”

The result is varying levels of understanding among patients, depending on the state they reside in. The new law, however, will relay the same information to patients in every U.S. state and territory, with the FDA developing density reporting language that will notify women of their breast density status, and encourage those at high-risk to communicate with their doctors about the next steps they should take.

Developing this language, though, is not the only task necessary for properly informing patients of breast density. Experts also point to the need for educating healthcare professionals on how to effectively communicate this information to patients, facilitating affordable access to supplemental testing, and conducting risk stratification and breast imaging in more personalized fashions.

Raising awareness and increasing education
Thirty-eight states now require breast density to be relayed in mammography reports, with the first law passed in 2009 in Connecticut. A driving force behind that legislation was late breast density advocate Nancy Cappello, who co-founded AreYouDense and AreYouDenseAdvocacy after being diagnosed with stage 3C breast cancer in 2004. She pushed for similar laws in other states, and testified before the MQSA committee for a federal law on breast density awareness within the Mammography Quality Standards Act (MQSA), before passing in November 2018. 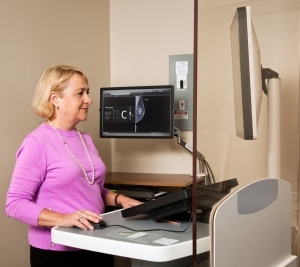 Agreeing with her is Dr. Jason Katzen, a radiologist at Washington Radiology specializing in breast imaging who hopes the new law will bring not just a greater understanding of tissue density but help patients discuss and access the right care pathway for themselves.

“It has to be conveyed to them in a certain way. We’re now required to not only inform physicians, but also, the patients of their breast density. Hopefully this prompts, whether it’s with the radiologist, the primary care doctor or gynecologist ordering it, a discussion of the patient’s risk factors, one of which is breast density,” he said. “It certainly will encourage them to continue getting annual mammograms and determine if other screening modalities in addition to mammography are necessary.” 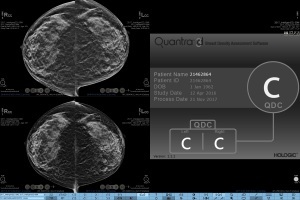 “I think for screening, a shortened MR will be the future, will be easier for the patient and will be much less expensive,” she said. “There are many sites around the country now where they are using MR screening in an abbreviated format for much smaller costs that are probably similar to that of ultrasound or maybe a little more but not anything like the high cost of MR that we’ve seen in the past.”

Luke Delaney, general manager of automated breast ultrasound at GE Healthcare, says personalization via risk stratification to determine the most appropriate screening exam for each patient is also a must.

One way this can be achieved, he adds, is with AI, which can provide clinical decision support, lesion identification and characterization tools, as well as the ability to prescribe multiple examinations based on risk factors.

Mo Abdolell, CEO of AI software developer Densitas, says that in its current state, AI is capable of providing stronger support to healthcare providers that aligns with the guidelines of organizations such as the American College of Radiology.

“AI has reached the unique ability to move beyond the traditional physics models that conventional breast density algorithms rely on, and augment them by applying AI principles that allow evaluation algorithmically of all mammograms in the manner that radiologists actually visually perceive them,” he said. “AI is uniquely positioned to deliver breast density assessments that are highly aligned with ACR's BI-RADS fifth edition breast density classification scale guidance, something that physics models alone cannot do as effectively.”

Federal versus state law
No final rule has yet been issued, with the FDA still developing the reporting language. Even after it’s announced, the rule will not go into effect for 18 months. Pushkin, who does not anticipate a new reporting requirement before 2021, says this makes it difficult, right now at least, to determine its impacts on individual state laws.

“States with no inform laws will now have to comply with and include the required information in the lay letters,” she said. “States like Maryland, whose existing density inform law indicates that the law becomes inapplicable if a federal regulatory standard under the MQSA is adopted, will have to abide by the FDA final language. For remaining states with laws, under the MQSA, all facilities would have to follow that federal reporting requirement. However, the MQSA also explicitly states that nothing in it limits the authority of any state to enact state laws relating to mammography that are at least as stringent as the MQSA or regulations under the MQSA.”

Katzen asserts that both state and federal laws are important, because they enable women to become more aware of breast density as a risk factor and may even make them aware of other risks that can lead to breast cancer.

“It’s important for women to be aware of their own risk factors, breast density being one of them, along with others,” he said. “Based on those risk stratifications, patients, along with their physicians, can determine what type of screening they should have, whether it’s just mammography or if supplemental screening is needed. It becomes a more personalized approach based on individual risk assessment.”

Delaney agrees, and says efforts to create individualized care pathways will provide more data to prove to insurers that supplemental exams are necessary to cover.

“If we can understand and prove with research, which technologies have the right clinical benefits for the right people, it will drive us to develop technology that is right for the problem and create data that demonstrates the clinical value,” he said. “At least from an economic value and clinical value perspective, I believe that eventually the health insurance and payor system will come to an agreement on the same evidence to determine what they should support in terms of large-scale, breast density screening programs.”

Abdolell says that developing any technology for the improvement of breast screening requires an understanding of the changing imaging landscape and healthcare environment in general.

“The whole paradigm that existed in the past is going to change because the drivers in healthcare are really around value-based care and precision health,” he said. “If we don't factor that into our technology development, and don't consider how the products that we develop fit into that framework, it's going to be a major failure in the industry.”