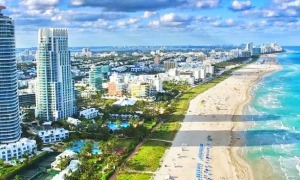 I will be honest, after a long day of meetings and dinner with friends I forget how many time I have been to FIME but there is no doubt in my mind that it has improved under Informa and now that it is back in Miami Beach it is even better.

For two years the show was in Orlando and while it grew in exhibitors and in attendance, the energy was different. FIME is in the new and improved South Beach Convention Center and it is definitely new and improved.

The old energy is back. There were more people, as well. In South Beach you feel like you are in a different country and it is an easier place for visitors from South America.

My unofficial survey tells me that there were more exhibitors and more attendees.

Bottom line: FIME is definitely worth exhibiting at, and attending.