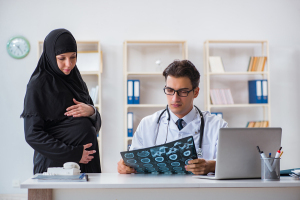 CT scans in the U.S. and
Canada increased for pregnant
women over two decades,
says a new study
The rate of CT scans has grown almost fourfold among pregnant women in the U.S., and doubled for women in Ontario, Canada, according to a large, multicenter study.

Researchers at Kaiser Permanente and universities across the country have found that the number of CT scans administered to pregnant women increased significantly over 21 years, thereby raising ionizing radiation exposure for both them and their unborn fetuses.

"The primary harm of CT is related to radiation dose, and there have been no studies that have evaluated changes in CT dose over time among pregnant women. We are currently investigating this as part of our research," senior author Rebecca Smith-Bindman, a radiology professor at the University of California, San Francisco, School of Medicine, told HCB News. "There are some factors that may have led to lower doses, such as improvements in machine technology, but there are also factors that may have led to doses increasing, such as the more frequent use of multiple phase scanning."

Though most pregnant women rely on routine ultrasound, which delivers no ionizing radiation, to monitor fetal growth, doctors occasionally opt for advanced imaging like CT to detect or rule out serious medical conditions of the expectant mother, such as pulmonary embolism, brain trauma or aneurysms, and appendicitis. While quicker, easier and more widely available than many advanced scanners, CT administers large doses of radiation that are many times higher than a chest X-ray and risk causing cancer and birth defects. It is recommended that such scans be kept to a minimum, especially during pregnancy.

Reviewing data within the National Cancer Institute’s Radiation-Induced Cancers study from six U.S. and Ontario-based healthcare systems, researchers tracked advanced imaging during the pregnancies of 2.2 million women who had 3.5 million live births in total between 1996 and 2016. Scanners included radiation-emitting modalities such as CT, radiography, angiography/fluoroscopy and nuclear medicine, as well as MR scans which do not emit radiation. Ultrasound was not included in the study.

Though CT scanning during pregnancy began dipping in the U.S. in 2007, the overall rate during the study period was 33 percent higher than in Ontario, where rates continued to increase.

Smith-Bindman says the findings indicate the importance of women checking to see if another imaging test without ionizing radiation is an option.

"While it is always a balancing act when choosing imaging with CT in pregnant women, I think avoiding CT whenever possible, and replacing it with other tests that do not use ionizing radiation makes sense," she said. "For some patients, surveillance of symptoms, rather than immediate imaging, may be the right choice. Women should not refuse CT, as it can be lifesaving, but they should talk to their physicians and make sure that CT is the best test to use, and if another test such as MR or ultrasound might give the same information, they should ask for that other test instead."

Researchers involved in the Radiation-Induced Cancers study are currently analyzing radiation doses that patients are exposed to during medical imaging to identify and address possible associations between imaging and the risk of childhood cancer.

The findings were published in the journal, JAMA Network Open.